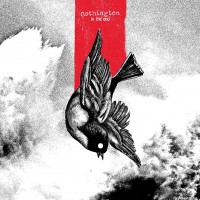 In The End marks the most recent release for San Francisco punk rock band Nothington. Nothington continue with their gruff voiced punk rock style, but In the End seems to be a more cohesive offering than past material with some more tender vocal parts and a bit more straight up rock and roll influences.

The band Nothington first comes to my mind along with bands like Hot Water Music, who competently pull off mixing a gruff vocal styling with punk rock and a catchy chorus. That sound is still very much present on In The End, but there are significantly more moments with cleaner vocal delivery. The reduction in the raspy vocals lead In The End to be a bit more radio friendly, but that isn’t a bad thing.

Nothington are not re-inventing themselves with this record by any means, but the overall sound of the bands seems to have grown and matured over time, not only in the vocal delivery, but also in the rock oriented song writing. The songs “Things We Used To Say” and “The Hard Way” could pop up in a 90’s teen movie sound track, alongside Ethan Embry, with the pop oriented choruses. This sound shift does not qualify the band for officially sounding like they are fishing for mainstream radio play, but if they get a bit of it, I would not be surprised. The country/folk influence that presented itself on some past Nothington songs is also dramatically reduced with In The End.

Nothington have delivered an enjoyable and fun listening experience with In The End. The band does not deviate from the mid-tempo, anthem style punk rock recipe, but they have made their formula a little bit more user friendly by toning down the raspiness of the vocals. The band seems to pull in influences from bands like Alkaline Trio and Hot Water Music, to bands like The Dropkick Murphy’s and even a bit more radio friendly pop punk. My single complaint with this record is that a few of the songs are a little bit on the long side. Verse/chorus/verse/chorus formula does not usually need to break the four-minute mark. Maybe my attention span is short, but sometimes too much of a good thing causes a song to start to drag. This is far from a major complaint, but punk rock songs written at a rock and roll length can usually be shaved down in a few spots.

The bottom line here is that Nothington have written a catchy and enjoyable record that will easily find a spot in my summer-time music rotation. The band has dished out some new and catchy punk rock anthems with In The End, and while a few tracks may be a touch on the long side, I recommend this to anyone who enjoys melodic, mid-tempo punk rock.

The New Lows: All Our Roads