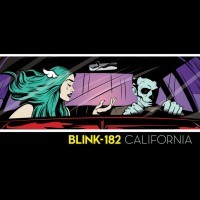 Odds are if you’re reading this site, you don’t need an introduction as to who Blink-182 are. Last year, the band released the album California with the addition of Matt Skiba on guitar and vocals along with the subtraction of Tom DeLonge from guitar, vocals and Area 51 conspiracy theories. However, that album had nearly 30 songs laid down during its recording sessions, so the remaining tracks that didn’t appear in 2016 have been repackaged into a deluxe edition for the summer of 2017.

For the band that dominated MTV and was the soundtrack to movies like American Pie, I believe a new Blink-182 release should always be bought on a warm, sunny Saturday morning from a chain record store in a large shopping mall. No hip, local shops or online ordering; I had to get a copy in its natural habitat. But breaking my sequence of reliving 1999 was that it was only available on vinyl whereas I would have grabbed the CD version, preferably in a plastic jewel case, hands down.

The 12 deluxe tracks are presented on an additional record labelled as sides C and D. “Parking Lot” starts things off; a fast, blasting anthem with great energy and lyrics about seeing Naked Raygun in Chicago. From there, the band delivers what’s mostly forgettable songs that almost all break the three-minute mark. Songs like “Misery” or “Hey I’m Sorry” go for the melancholy feel of those highly questionable Self-Titled experiments and I even detected a few leftover ideas from Mark Hoppus and Travis Barker’s 44 project on “Last Train Home.”

But it’s not all bad news. “Wildfire” is an exceptional standout that is easily one of the strongest songs from the entire California sessions and “Can’t Get You More Pregnant” is a nice, short burst in the vein of “Built This Pool.” Other obvious positives include Travis Barker’s speed and creativity around the drumkit as well as the record’s production value; these tracks have got to be the slickest outtakes or B-sides that I’ve ever heard. An acoustic, live version of “Bored To Death” closes the record. Not only do I disagree with this song being selected as the lead single, but including it again at the end of this album in an acoustic setting just doesn’t do it for me since this is a band I associate with festivals and stadiums, not coffee shops and campfires.

Overall, the Deluxe Edition could have been boiled down to a solid four or five song EP release that could have followed the original California. Another way to go about this could have been to cut a few of the weaker songs from the original and then add in the few gems. But this extra-long, double-record won’t win over any new fans and will likely just appeal to the devoted ones for completing their music collections. Sometimes certain songs are outtakes for a reason and maybe they should be left that way.