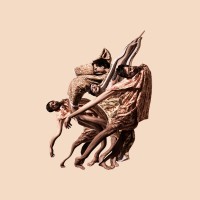 Smidley is the side project of Foxing frontman, Conor Murphy, and finds him diving into the sunnier side of life and away from the tragedy of say, "Rory". Where Foxing finds depressive roots, Smidley finds flowers soaking in the sun. Murphy hangs himself out to dry here with friends like Joe Reinhart (Hop Along) and Ben Walsh (Tigers Jaw) on guitar;  and Cam Boucher (Sorority Noise) on sax. It's a buzzing, fun album that finds everyone at their collaborative strengths, although I admit it could have been an EP as a few songs just felt bland and unnecessary.

Murphy's vocals are unmistakable and what differentiates this from Foxing is the musical spine. It's no longer about slow burns but about driving, upbeat power-pop songs. That indie/emo vibe's amped up on "Hell", "Pink Gallo" and "Fuck This" -- the latter shines most with its bass-heavy, psychedelic funk tone. These songs are catchy and blend nicely with the acoustics, horns and synth-pop essence thrown at you, which honestly feels like Murphy just wanted to have a party away from the dark songs he usually writes and sings. "Power Word Kill" sums this record up nicely, as it comes off like a modern track from Say Anything, reminding us that while Murphy's usually a sad soul, he has a lot of energy and life bubbling around inside his shell. Eclectic, a tad long but overall, Smidley's worth the pickup.