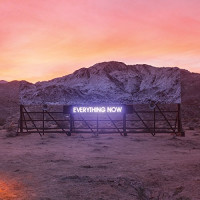 A lot of these will be used to describe Arcade Fire's Everything Now and honestly, they all apply. Arcade Fire are no longer an indie band nor anything near the rock genre. That was obvious with the transition made from The Suburbs to Reflektor. There's no room for songs like "Wake Up" and "We Used To Wait" in their arsenal, which at present is focused on minimal, short and punchy pop songs. If anything, they wanted to make a dance record and here, they did. I should have taken note when I saw how short it was -- under an hour was an indicator. I should have also taken note when Daft Punk's Thomas Bangalter was announced as a co-producer.

It'll be interesting to see them mix these songs in live because almost all of Everything Now feels like those interlude songs littered on their old albums. Here, they aggregate them and pay homage to disco, funk, electro-pop and the synth movement. You can tell they want you to go dirty dancing off the cuff with the self-titled track which immediately feels like a tribute to "Time of My Life". This quickly barrels into the Motown-esque "Signs of Life" before one of the album's better tracks "Creature Comfort." It has a very powerful industrial-synth intro and the lyrics are socially hard-hitting as they rant about body images and struggling for acceptance. This is one of the rare tracks where the lyrics actually get deep because brace yourself, the words everywhere else are some of the most shallow Win Butler's written to date. Note the end of this song because once you run through the record, come back here and you'll realize that the thing this song is missing -- a big hook -- truly embodies what the rest of the record lacks. There's a forced melody. Some room to sway. Some to jive. But again, the rhythms aren't there.

You'll find a lot more style than substance on Everything Now, but because of the band's rep, you'll want to power through and give them the benefit of the doubt. Cut to the catchy "Peter Pan" which feels like a cheap Foster The People rip-off (which I admit I dig). "Infinite Content" does have a bit of a harder rock edge though to remind you what they could do. However, there's another slow, dull version right after that throws you right back off the horse. Later on, there's a Daft Punk-vibe on "Good God Damn" and a Vampire Weekend-esque turn on "We Don't Deserve Love" to emphasize how much this record lacks originality. It's way too much of a tribute album -- intentional or not. No guitars, no aggression, no flow, no percussive drive. Another major fail is when they decide to include Régine Chassagne on the vocals. They drop way too much autotune on her sections and constantly kill her off, as with "Electric Blue". Not sure why they wanted this overly-commercial product but it's devoid of any creativity and art. You have a few little gems here and there but Arcade Fire truly disappoint. I can't wait for their next album to hopefully rectify this. Everything Now feels like everything's dead as it lacks any sort of freshness or intrigue. Please, give me another Funeral or even a Neon Bible.

Against Me!: Stabitha Christie [7-inch]