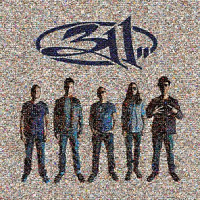 311 have been one of my favorite bands since high school. It took me a while to write this because I'm so attached to them and I really did want to cast proper judgement on Mosaic. Love 'em or hate 'em, they're good at what they do which is an infusion of rap, reggae, rock and dancehall. Being from the Caribbean, that'll obviously click with me. What I love about this new album, apart from it being one of 2017's earliest summer breezes, is that it that pays homage to 311's various eras -- from that of a young fiery upstart to alt. rock/radio veterans. This time though a lot more pop sensation is embedded in and it actually works out pretty well.

You've got melodic, vibrant jams kicking things off that show 311 do what they want and that's make music people want to bob to. These songs feel like they're catering to their crowd and thanking them for sticking along for the ride, even after some grew up, old and probably thought it was time to get off the ship. Songs like "Too Much To Think", "Hey Yo" and "Syntax Error" are such thank you notes from the heart and to be honest, they got me to really go back into the band's music post-Evolver and dig what came after. I admit I was a bit harsh on those records but that said, I never stopped giving 311 a chance.

This album justifies that faith because you also have odes to big singles of old. "Wildfire" feels made for fans of "Come Original" and likewise, "Perfect Mistake" sets a mood for those of "Down". Stylistically and lyrically, you feel them calling back to these songs while Nick Hexum brings his A-game. Amid all the sharp rhythms and thick funky basslines, he sounds as good as ever. I do wish he had more interplay with Doug Martinez though.

One of the best tracks they've ever done then unfolds mid-record via "Extension" -- where Hexum drops a Jr. Gong "Welcome to Jamrock" vibe only to rip into a breakdown like "Don't Stay Home". That's what makes this record tick -- it's diverse, feels like candy for fans but still has that accessible appeal for newbies. This is a track that has so much replay value and if you're not a fan, this is the track that'll get you into 311.

That's not to say the record doesn't have a few misses though. "Inside Our Home" and "Places that the Mind Goes" feel eerily like Jason Mraz rip-offs and should have been dropped. They're so tacky and in all their attempted sweetness, it's simply cookie-cutter fluff. The same goes for "'Til the City's on Fire" which has an awful Sean Paul meets 3OH!3 essence ringing out. That said, there's a lot of volume on tap on Mosaic and with so many songs here you'll find much more good than bad. And when it comes to fanboys like me, that will surely count for a lot. Mosaic is a fitting title for a band that still has the fire burning so here's to 311 kicking more ass in the upcoming years.

ANTHONY: We All Die Alone