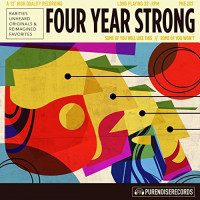 Four Year Strong nailed one thing on their new album: the title. Their new acoustic/ rarities album, Some of You Will Like This, Some of You Won't is a bold statement from a band trying to remain a staple in a community they helped build. The album showcases the band's songs acoustically adding more intricate elements in their guitar work. While these new parts are implemented well, the songs are lackluster at best.

The problem with many of these acoustic renditions is that it lacks what the real songs sound like, replacing breakdowns for soft filler parts. While acoustic albums seem to be a big thing nowadays, it's impossible to imagine an easycore band with such obviously hardcore influences, taking away the best parts of their songs.

One song the band does add some flair on is "We All Float Down Here." The band gives the song a southern makeover making the song sound more like a hoedown. The song really shines in the bridge where FYS goes into full jam mode making for the most interesting part of the record.

Some of the rarities on the album are a good filler for the acoustic parts of the album. “Let Me Down Again” has a nice moving sound that fits the mold of the acoustic stuff but is a little more invigorating making it one of the better songs on the album.

Many fans will rejoice being able to hear these songs in a stripped down manner but others will find it hard to get through the entire thing upon one listen. While Four Year Strong definitely chose a good batch of songs to strip down, the album ultimately lacks the real feeling the originals embodied. While it's nice to hear a different side of Four Year Strong, many of them sounded fine just the way they are.