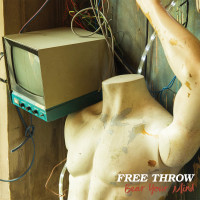 Free Throw have a pretty interesting dynamic. If you're a fan of 2014's Those Days Are Gone then you'd lean towards the emo coin but as the years have rolled by, you can tell they're much more than a Nashville band paying homage to the twinkly burn of that genre. Bear Your Mind solidifies this and reiterates that apart from emo, they can tread water in an accessible pop-punk vein that'll certainly have them lined up for Warped Tours to come.

There are a lot of varying styles clashing here, in a good way. "Weight On My Chest" and "Dead Reckoning" paint their more aggressive face, similar to bands like Daisyhead and Balance and Composure. As for their emo side, "Victory Road" is a map that fans of contemporaries like Sorority Noise and Modern Baseball will follow. All set to heartfelt and earnest lyrics that feel like Evan Weiss (Into It. Over It., Pet Symmetry) took a stab at things. If you're also looking for them to wander a bit and cut loose, then "Randy, I Am The Liquor" has a Tiny Moving Parts math-thrill to it, continuing a rollercoaster which feels cut for the new emo revivalists. If that's a thing, that is.

As for the Warped Tour reference, think of Neck Deep when "Andy And I, Uh..." hits. It shows the range of the band and a progression that, even if it's not your cup of tea, is undeniably going to pull crowds. All in all, Bear Your Mind has some great cuts and a few misses but I'm pretty sure you'll find yourself loving most of what's on tap.