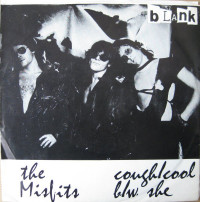 And this is how legends are born. After forming a new band in January of 1977, Glenn Anzalone had adopted a new surname “Danzig” with the intention of creating a darker, more mysterious punk band. He had been in several garage bands prior, ones that referenced bands like the Animals and the Doors, but wanted something more aggressive that still conjured the ominous mystery of the blues based bands.

Within eight short months, the newly “christened” Misfits had already recorded their first single, though, Danzig and the only other constant member, Jerry Caiafa, had trouble keeping other people in the band. Without a guitarist, the band opted to record their debut single, “Cough / Cool” with Danzig on the organ in lieu of guitar. While this practicality may have annoyed him in later years- he would go to rework the track in several incarnations, all with guitar on future compilations- the organ base would signal that something was very different with this new band.

Certainly, they were still finding their identity. The cover features the band in Richard Hell style rags and Danzig’s label, “Blank” was in that identifiable Sex Pistols ransom font. But, “Cough / Cool” itself was more ominous. As the monster mash organ rolled in the background, Danzig crooned in his unique Elvis-meets-Morrison vocals while issuing oblique decrees of a sinister nature. Did anyone really know what “we cut our visions with two eyes” meant? And so Danzig began his journey as a master scene setter- the song detailed streets of piss and fear, but left enough ambiguity to puzzle listeners for years. It seemed he was describing something very specifically, but what otherworldly thing, we couldn’t say.

“She” was a bit more direct. Most likely detailing and investigating the psyche of Patty Hearst, Danzig utilized a more traditional song format, ending the track with one of his identifiable crescendos. He also began his long running trait of glamorization of the macabre and unexplainable. He doesn’t pass judgment on Hearst so much as follow her, and at times, seems to be sympathizing with her damaged mentality- Danzig may not write “I hate society” lyrics, but he often hides that direct angle beneath a more puzzling foreground as here, where Hearst inexplicably linked up with bankrobbers.

Interestingly, Caiafra, who after this release would re-titled himself as Jerry Only, is in his fledgling form. Later Misfits records would find Only slamming down his bass like a jackhammer, not so much playing the instrument as beating sound out of it. But here, you could practically hear him find his way around the fretboard, cutting bass lines that are gentler and frankly, almost jazzy sounding. This approach would not last long, but like Danzig’s organ solution, it contributed to the release’s unique nature. This was not just another punk band strung out on heroin or singing about thatcher.

There was something deeper and darker going on here, and while it may not have been on the forefront of this release, all the hints were already there. Like so many classic monster movies, the band just needed time to mature from its creepy embryonic stage into something more horrific, more confident, and more violent.

Bob Marley and The Wailers: Exodus