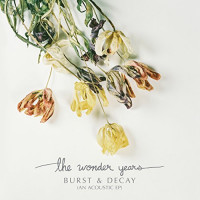 The Wonder Years are a band that have been a household name in the scene since, in my opinion, their breakout year of 2010, when they released "The Upsides" on No Sleep Records.  They followed up with what I am sure will be essential listening in 20 years when the conversation of the pop punk resurgence of 2000's will take place with "Suburbia..I've Given You All and Now I'm Nothing".  Two more albums to follow that up, and that brings us to 2017's "Burst and Decay" EP.

This is a 7 song acoustic EP, with tracks that represent the bands last three full lengths.  "No Closer to Heaven" has the most tracks represented on the record, opening with "A Song For Ernest Hemingway".  Acoustic albums from bands can be hit or miss.  On one hand, fans can view the record as a cash grab.  Maybe the band has lost some inspiration and due to contracts need to put something out, so here comes an acoustic record of old songs, and sound just retread.  Fans of the Wonder Years need not worry on any of those fronts.  This isn't just Dan Campbell and a guitar, as drums bass, guitar, and other add-ons are all present.  Nor are these songs just a re-do.  Go listen to the emotion in Dan's voice in "Cardinals" and know the passion is as strong on this rather slower occasion.  Much like when Taking Back Sunday did the "Live from Orensanz", this acoustic affair is certainly not lacking on energy.  "Don't Let Me Cave In" really let's Dan shine through, and when the band joins him on the first chorus, you will be singing along just as loud as if you were listening to the Suburbia version

The band decided to release this EP on their own imprint label, Loneliest Place on Earth, a subsidiary of Hopeless.  The Philly sextet did their fans right with this release, as it was a perfect hold over for whatever they have planned for 2018, as their social media has let everyone know something is happening this year.

Neck Deep: The Peace and The Panic