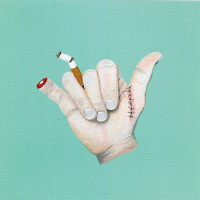 Every two years Tiny Moving Parts drops a bomb, one blending the indie rock and roll burn of the Midwest with a style of math-rock/finger-tapping that well, just check their live videos, especially "Clouds Above My Head". There's something magical to their brand of music, which since 2014's Pleasant Living shifted slightly towards the pop-punk spectrum. 2016's Celebrate came along and then managed to best represent the change. But even though that record still stands as their best body of work, I have to admit that Swell here does a highly commendable job of attempting to echo its feats. It's really friggin' good -- is what I'm basically saying.

It picks up right where Celebrate left off, and comes off as one of their most accessible jumping-on points to date, one which I can see storming college radio waves even more and leading to the band selling out like The Front Bottoms did. And quite frankly, I wouldn't piss and moan because TMP fully deserve it. The trio wax on and on about how we cope with life's anxieties, whether it's via beer, cigarettes or holding the hands of loved ones -- in what's remarkably their best-written record so far and a reminder of how far they've come from playing to dozens of people in dive bars. Musically, it doesn't hit as hard as Celebrate but I love how poppy and bouncy they up the ante here on songs like "Smooth It Out" and "Applause" -- as it to tell Warped Tour they need them on the bill. But as a band of quality that is, not some generic snoozefest aping American Football or The Hotelier or something.

These songs in particular typify how well-produced and clean the album is. "Basically focusing on your happy brain cells in hopes that it'll overcome your negativity like your doubts, your weaknesses, your fears," said lead Dylan Mattheisen on the album and it reflects here in how polished and happy he sounds. His delivery is less angsty and more upbeat, matching the magic he weaves on the guitars. "Caution" is one of their best songs to date, reminding of what they achieved on This Couch Is Long... -- bubbly, dynamic and catchy indie-rock.

And make no mistake, there's energy and intensity at every turn, from the frentic kitwork to the melodic basslines to well, lyrics about waiting for life to offer that "slight break" that we all crave but never manage to get. I have to admit that by the time "Warm Hand Splash" closes off Swell, it's apparent that TMP are going even bigger places and quite soon. Like I said, they deserve it. Technically sound and emo-powerful, so you know I can't ask for much more. The album could have been one or two tracks shorter but nonetheless, this lived up to the hype.