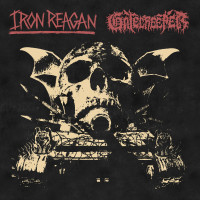 My biggest complaint about the new Iron Reagan/Gatecreeper split is that there isn’t more Iron Reagan. Unless you’re The Dwarves or Circle Jerks, your album shouldn’t be under 19 minutes long. Anyway, this is actually Iron Reagan’s third split release, the first two being with Exhumed and Toxic Shock. The Richmond, VA crossover thrash quintet supplies five new tracks. Gatecreeper is a newer five piece death metal band from Arizona with an LP and a handful of EP’s under their belt. On this album, they chip in basically two and a half songs.

I’ve become such an Iron Reagan fanatic that I’m happy for any new material from the band. These five songs do not disappoint, but they don’t really break any new ground either. Any of these tunes could have been on either of their previous Relapse full lengths. Opener “Warning” starts off sort of melodically before going into full thrash mode. “Paper Shredder” recalls vintage Anthrax. “Take the Fall” is probably IR’s most aggressive contribution. “Proudly Unaccountable” is over in the blink of an eye. I would argue that first half closer “Burn For This” is the album’s best track.

I’m not a huge death metal fan, but I can enjoy it in small doses. Maybe it’s fortunate for me that Gatecreeper only provides a small dose. First comes the under two minute instrumental intro “Daybreak”, followed by two proper songs. On “Dead Inside” and “War Has Begun”, I can get behind what Gatecreeper is doing musically. The chugging, changing of speeds, and pure heaviness of it work for me. What I can’t get into are the vocals. The overly guttural, low pitched Cookie Monster imitation leaves me cold. I know people love it and it’s supposed to be BRUTAL, it’s just not for me.

For the most part, these two groups of headbangers go well together. There’s certainly potential for both bands to win over the other’s fans, even if it didn’t work for Gatecreeper on me. Someday Iron Reagan will put out a compilation album that collects all the tracks from their splits, EP’s etc.., and this album will be rendered obsolete. Until then, I’ll gladly crank it up.