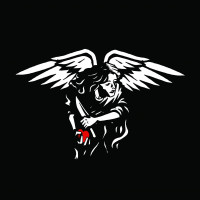 Comebacks are hard, especially if it has been a while since your last record. I remember being really excited (and later disappointed) by Amebix’s return a few years go and still have hopes that Bold will finally record that new album, but sometimes it is better to just let an old dog die. Why not take the opportunity to explore new musical and lyrical avenues under a new name?

At other times however, an untimely break-up may genuinely leave a sense of unfinished business that still needs tending to and Boston’s American Nightmare is one of those cases. Thankfully they seem to have resolved their name issues and are back to their original moniker (Give Up The Ghost sounds so dated!) and have picked up pretty much they left off with “We're Down Til We're Underground” in 2003, proving that time is somewhat relative.

About fifteen years have passed since their last full-length offering, so while there should be no expectation of things being entirely the same, American Nightmare have produced a record that fine-tunes their take on hardcore. Album opener “The World Is Blue” features all of American Nightmare’s hallmarks that distinguished them first time around.

Sure, the vocals might not be as strained or desperate as before, but the guitar riffs are as firm and punishing as ever, while the bass-lines have a genuinely haunting quality. If you are not convinced, songs like “American Death”, “War” and “Lower Than Life” demonstrate that they have not lost their hard edge and can still write highly danceable breakdowns and mosh parts.

The album is not without its calmer moments though, such as on “Colder Than Death” which kicks off with a gloomy bassline and has delves into goth territory with the haunting background vocals. Album closer “Crisis of Faith” finds American Nightmare at their most rock and mellow. While I was expecting the tempo pick up a bit, they finish the song on a somber note, with the vocalist quietly reciting his lyrics and bringing the album to a spectacular, emotive end.

American Nightmare left their mark in the early 2000s by combining their old school hardcore punk thrash with a more poetic and introspective lyrical outlook. Back then they undoubtedly showed the way to many angry kids that there was a more eloquent way to express anger and frustration. Fifteen years they carry the same message, which is as refreshing and exciting as ever.