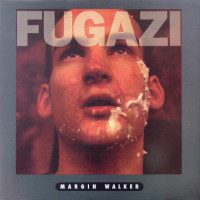 In June of 1989, following the release of their self-titled EP the previous November, Fugazi set out to record and release their full length album. Unfortunately, since they were disappointed with a lot of the songs on the full-length, it got chopped down into a six song EP called Margin Walker. Margin Walker is primarily available today as part of 13 Songs, a compilation album that packages together Margin Walker and the self-titled EP as one album. While 13 Songs is Fugazi’s highest selling record of their career, whenever people talk about the album, they tend to focus on the Fugazi EP half over the Margin Walker half, mainly because of the presence of “Waiting Room” and “Suggestion” on that part of the album. The only thing drawing any attention to the Margin Walker side over Fugazi was that Margin Walker was technically the first Fugazi release to feature any guitar from Guy Picciotto, who had only contributed vocals on Fugazi. So let’s take a moment to look at the oft overlooked Margin Walker.

What I love about this early era of Fugazi is that you start to see Ian MacKaye’s songwriting absolutely transform. Five years passed between the break-up of Minor Threat and the release of the first Fugazi recording, and in that time MacKaye took part in Embrace, more or less the second band to ever be referred to as “emocore,” and a very short-lived side act called Egg Hunt that only released two songs. In Minor Threat, MacKaye’s songwriting had been very straightforward and lacked much in the way of poetry. As great as his songs in Minor Threat were, they involved MacKaye mostly just shouting political opinions exactly as they came to him. Embrace gave him the chance to begin to grow his style a little bit more, but it wasn’t until he reached Fugazi that we saw songwriting so transformative, it felt like it came from a different man. Part of it was probably that Fugazi paired MacKaye with co-frontman Guy Picciotto, former lead singer of Rites of Spring, the first band to be referred to as “emocore,” who started to rub off on MacKaye.

An anti-violence song on a Minor Threat record, the band that brought us the lyrics “Don’t smoke/Don’t drink/Don’t fuck,” would probably give us a chorus along the lines of “Don’t hate/Don’t fight/Don’t kill.” Instead, Fugazi’s “And the Same” gives us MacKaye’s equally angry but far smarter lyrics of “If you have to carry a gun/To keep your fragile seat at number one/This is a bullet you can't outrun:/Your way of thinking.” While still straight forward enough to understand, we see MacKaye being creative with language and metaphor. “Burning Too” likewise is a song easily interpreted as being about environmentalism, but uses metaphor—albeit obvious metaphors in terms of “the sky is burning” and “the earth is burning”—to get the point across. But “Promises” is where we really see MacKaye at his most abstract on this album, ruminating on the meaninglessness of promises and the nature of language.

None of this is to knock the early Ian MacKaye songwriting from his time in Minor Threat, which was great for what it was. But the move from Minor Threat to Fugazi was a monumental shift in style for MacKaye and huge step forward in maturity. Picciotto’s contributions to Margin Walker—the title track, “Provisional,” and “Lockdown”—are closer to his writing from his earlier bands like Rites of Spring than MacKaye’s was to his work in Minor Threat. Picciotto had always been abstract and metaphorical in his songwriting, and none of his songs on this album are easily open to interpretation of their meaning. The pair would continue on to become stronger and more mature songwriters up to the culmination of the band on The Arument, where the songwriting is some of the deepest, most abstract, and most artistically mature that either songwriter ever created.