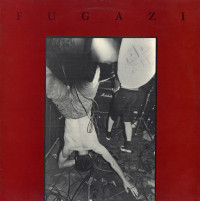 Fugazi’s self-titled EP was the actually the first thing I ever heard by the now iconic Washington DC quartet. Of course, I didn’t know it at the time. To me it was just the first half of their 13 Songs LP, which was released a year later. I only knew that Fugazi was a new band with Ian from Minor Threat. That still meant a hell of a lot in the late 80’s. Those seven tracks are still some of my very favorite Fugazi songs. Ian MacKaye wrote everything on Fugazi, while later releases would be true band efforts. This EP represents the bare essence and primitive roots of a group that would never really stop evolving.

Opener “Waiting Room” has to be their best known song. Even people not really into Fugazi know “Waiting Room”. That’s probably why some of their hardcore fans (pretend to?) dislike it. They shouldn’t. It really was that good. It was also a template for so many great songs that would follow. Plus, we can’t forget that bass intro and the amazing drop at the 22 second mark. Fugazi was the band’s only release on which Guy Picciotto sang but didn’t play guitar. I’ve always been drawn more toward Ian MacKaye’s vocals, but Picciotto had an undeniable, raspy appeal. “Bulldog Front” was a prime example.

“Bad Mouth” was another undisputed classic. It delivered a message without being preachy, and even had a beat you can dance to. “Burning” and “Give Me the Cure” again featured Picciotto on lead vocals and were fairly straightforward rock songs, at least by Fugazi standards. Two adventurous songs wrapped up the EP, and gave us a glimpse into the future. “Suggestion” has become a bit of a feminist anthem. The anti rape song delved deep into the idea of toxic masculinity, long before any of us had ever heard the term. “Suggestion” quickly became the noisy, anti drug “Glue Man”, suggesting a single musical movement.

Early on, Fugazi was described as an attempt to meld dub and reggae with punk and hardcore. That is more apparent on this EP than anything that came after. It was definitely something that hadn’t been done before. (And hasn’t been done nearly as well since.) Later, the band would become more experimental and move deeper into art rock territory. There were signs of that here too. Ultimately, Fugazi become whatever they wanted to be. Or maybe it was whatever they were supposed to be. Either way, it all started here.