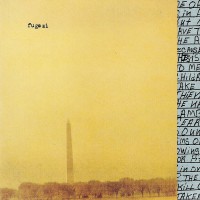 Few bands can claim any semblance of Fugazi’s discographical consistency. To this day, the utter lack of fan consensus as to which album reins as the band’s crowning achievement illustrates their commitment to excellence. I, myself, have fluctuated on this affair, assuming both Red Medicine and Repeater as favorites at various points in time, but something always draws me back to In On the Kill Taker. This record captured Fugazi at their best, perfectly balancing the captivating composure of their signature instrumental grooves with some of the hardest hitting refrains in all of post-hardcore.

The way in which the band was able to seamlessly work standout singles such as “Great Cop,” deep into In On the Kill Taker’s tracklist, without disrupting its flow, is a testament to the record’s sequential precision. But despite these organizational considerations, the record sounds unpremeditatable. Members, Brendan Canty, Joe Lally, Guy Picciotto, and Ian MacKaye were able to play off of each other so naturally, that many tracks sound as though they’re entirely improvised.

Fugazi demonstrated these dynamics right off the bat with the one-two punch, “Facet Squared” and “Public Witness Program”. The former embraced the jam aesthetic to an extent, while still utilizing a distinct structure. “Facet Squared” is, at its core, a two-minute build to the throttling snare-roll release of “Public Witness Program”. Canty’s powerful drum performance drove this cut forward, while Picciotto made his lively entrance to the record as lead vocalist, with MacKaye returning to the fold for a soaring duet over the refrain. “Public Witness Program” had Fugazi firing on all cylinders, making the temperate opening of “Returning the Screw” such a jarring change of pace.

“Smallpox Champion” is hailed by many as In On the Kill Taker’s apex, though, I have my reservations about the track. The pan flute accompaniment on its first chorus can be a bit grating on repeated listens, although it’s hard to fault the band for its inclusion, as it draws more attention the song’s central message of anti-colonialism. “Rend It” may have the most interesting hook of the lot, opening in an explosive continuation of “Smallpox Champion”’s cacophonous cumulation, before abruptly dropping into a fierce vocal solo from Picciotto. Finally, Fugazi played side A out with a gradual descent into discomposure on “23 Beats Off”. “23 Beats Off” is a distillation of Fugazi’s organic approach to songcraft, concluding with three minutes of feedback-driven pandemonium. This foreshadowed an aesthetic the band would explore in greater depth on Red Medicine.

Side B proved even more dynamic than the whirlwind of sonic exploration of tracks one through six. Much like its counterpart “Facet Squared,” “Sweet and Low” is a serene instrumental foil to set up Picciotto’s spastic ad-libbed intro on “Cassavetes”.

The energy of “Cassavetes” is then complemented, and expanded upon by “Great Cop,” a glaringly underappreciated single in the broader context of the band’s discography. This late album burst of energy clocks in at just under two minutes, but prevails as one of the most memorable moments in In On the Kill Taker’s 42-minute runtime. Though it may not have been the most aggressive performance of MacKaye's career, “Great Cop”’s inclusion amongst the more technically savvy post-hardcore compositions, makes it an all-out riot.

“Walken’s Syndrome” maintains a similar intensity, with Picciotto returning to the fold to deliver the record’s final blast of pure vivacity atop a disorienting structure. “Walken’s Syndrome” showcases multiple shifts between common time and 7/8, and the band’s seamless executions of these shifts sell the track’s urgency.

Was In On the Kill Taker Fugazi’s magnum opus? I think a compelling argument could be made either way. Did this album convey the full creative potential of the talent involved? Most definitely. These 12 post-hardcore masterstrokes perfectly encapsulated everything Fugazi represented, especially when taking cultural impact into consideration. In On the Kill Taker became the first of four full-lengths in the band’s catalog to breach the Billboard 200. Though this achievement wasn’t their objective, Fugazi’s involuntary entrance into the public consciousness provided them with opportunities to prove their credibility, to the ire of many eager investors. Furthermore, In On the Kill Taker saw Fugazi hone their sound into the post-hardcore blueprint that countless bands would attempt to emulate. Despite this, In On the Kill Taker has been kept sounding fresh to this day by its sharp songwriting and impassioned performances.

The Evens: The Odds