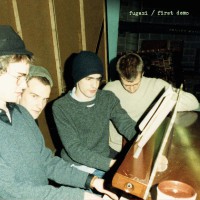 Recorded with Don Zientara at the legendary Inner Ear Studios back in January of 1988, Fugazi’s first demo came after a handful of shows, but only saw an official release twelve years after the band’s hiatus. After having gone through a couple bands since Minor Threat’s break-up in 1983 (with Embrace being the more straightforward follow-up endeavor), Ian MacKaye joined forces with members of Rites of Spring in 1987.

All of the songs contained on this posthumous release would eventually make their way in Fugazi’s studio discography, with the exception of “Turn Off Your Guns” that has only existed in its hard-to-find demo and live recording form. While at first glance the release of a demo seems geared towards satisfying the completionist fan, this one also serves as a rather excellent starting point to Fugazi’s stellar discography.

What is remarkable about the demo is that despite coming so early in the band’s history, there is already a rather clear vision and promise of further growth. The demo versions more or less match the more familiar renditions of the studio releases, although there are variations and changes here and there that stand out a bit and will grab the attention of the seasoned Fugazi fan. Album opener “Waiting Room” seems a bit loose, with MacKaye not quite accustomed to the song’s groove. His vocals come in ever so slightly earlier than expected and he even adlibs. In other instances the changes are more noticeable, such as in the case of “Merchandise” which features a slightly different piano intro and includes a couple extra lines. Diehard fans will no doubt enjoy picking out the many more slight variations, before looking at the bigger picture and addressing the elephant in the room.

What is remarkable is how Guy Picciotto handles lead vocals on only one of the eleven songs (“Break-In”) and mostly bounces off MacKaye, acting as his foil with backup vocals. Subsequent releases would see the two singers split lead vocal duties, offering a more balanced and dynamic experience than on this demo. Nevertheless, his relative absence from the forefront of Fugazi’s vocal assault does not seem to really be that noticeable. After all, his position in the band at the time had not been cemented and it is conceivable that Fugazi could have moved on without him (or someone else).

As a demo, the live recording feel conveys a sense of wonder and excitement (with a dash of uncertainty), that became such an essential aspect of their sound and permeates throughout these eleven tracks. While the recordings may not have the polish of their later reincarnations, this only seems to further underline Fugazi’s brilliance and daring attitude to music, more so when examined in relation to the prevailing trends in the punk and hardcore scene. This was the start of something incredible.

The Evens: The Evens