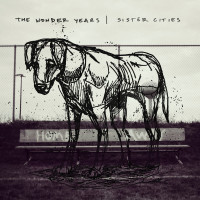 I'm not sure how many fans share my view of The Wonder Years in that they keep getting better and better by the record. Maybe it's the way the narrative matches me in my 30's but there's just something about Dan Campbell's words that hit home pretty hard at this point in my life. I've thoroughly enjoyed the last two records but surprisingly Sister Cities manages to outlast them all. I thought the last album No Closer to Heaven would be untoppable but this record really scrapes past it with so much more heart and soul - something I didn't think was even possible.

In this, their sixth album, Campbell wades into the dreams of a band that's never kept its heart away from Philly, and one that will forever be impacted by the people they've met along the way. From friends to family, Sister Cities speaks volumes about this love as well as the loss that comes with it. As he's gotten older, Campbell's take on depression, substance abuse and death have brought forth a much better lyricist, and to me a vocalist that's at the top of his game because he's so comfortable in this skin: pouring his heart out and really detailing the tragedies that have influences his outlook on life (whether bleak or optimistic).

Sister Cities takes full advantage of this perspective while coursing the most well-produced and expansive sound I've heard from TWY. I won't even call it pop-punk, it's more alternative punk -- because to me this shows how unconventional and fluid the band can get. You've got super-aggressive tracks like "Raining in Kyoto" (a tribute to Dan's grandfather) and the title song, which feel on par with "Cardinals" from the last record. But where the band's versatility unfolds is on the songs that marry slow builds; progressively bigger hooks; and bursts of loud noise that create melodic perfection.

"Pyramids of Salt" is a great example, along with "Heaven's Gate (Sad & Sober)". The best song on offer though comes via "We Look Like Lightning" which again highlights the duality of the band, without getting too complex. It's paved with clean soul-searing vocals and a rhythm that once more feels like a continuation off No Closer... with signatures of past songs like "A Song for Patsy Cline" and "Stained Glass Ceilings". If I'm using the fifth album as a gauge too much, pardon me. But that's the gold standard for me. So trust me, writing abut these songs reaching the same level and even surpassing is something we can all take joy in.

Back to the music... there are ballads as well such as "When The Blue Finally Came" that emphasize how good they've gotten at stripped down music. I mean, if you heard TWY's Burst & Decay EP recently, you'd know how much Dan really loves acoustics and that non-electric symphonic approach. Here, you can feel the orchestral vibe of a man who's older and wiser, but also much more love with his music -- also evidenced on "Flowers Where Your Face Should Be".

By the time the record closes with the shimmery post-rock haze of "The Ocean Grew Hands To Hold Me" it's difficult not to appreciate the art and majesty of TWY. It's rock and roll poetry in motion and yet another stark indictment of how we shouldn't let old ghosts haunt our present lives. In the end, Sister Cities reminds us about all this and more so, that distance truly doesn't separate our hearts... so long as we let them love freely and fly freely like birds. Oh yeah, the bird references I've finally figured out Dan. Well played, sir. Well played.