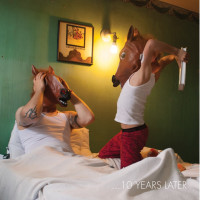 If you are a record collector like me, then you know that there are some band’s out there whose records are pretty difficult to find for a decent price on the secondary market. For me A Wilhelm Scream is one of those bands. I don’t say this out of hate. I have been a huge fan of the band for years and I have seen them live multiple times. In late 2017, they released a pretty big reissue of their 2007 album Career Suicide as a double LP for its tenth anniversary.

Originally released through Nitro Records, Career Suicide is arguably A Wilhelm Scream’s most popular record and that is what you get on the first disc of …10 Years Later. The first ten minutes (or first three tracks) truly capture you. The first song “I Wipe My Ass With Show Biz” is a quick rager filled with massive vocals from Nuno and a guitar solo outro with the band’s amazing use of harmonies. The lyrics are a great commentary and parody of the current music industry as well. Then comes “5 To 9” which is a rowdy and thrashy, mega-anthem. And finally, “The Horse” is not only a track that stands out in the album, but the band’s whole discography. It is a five-minute journey filled with incredible guitar and bass tapping techniques and soaring vocal harmonies. Listening to all three songs in order is an experience in and of itself. That being said, there is a still an amazing amount more to be explored on this record. Later tracks like “Get Mad You Son Of Bitch!” and “We Built This City (On Debts And Booze)” show A Wilhelm Scream’s ability for writing incredibly clever lyrics and catchy, sing-along choruses.

What makes Career Suicide…10 Years Later such a cool release is that the Black And Blue Demos are on disc two, which is the pretty sizable collection of demos that would later become the proper full-length. It’s fascinating to hear the more “primitive” versions of such complex tunes like “The Horse” where you notice little things like guitar licks are missing or the vocal arrangements are somewhat different like in the demo version of “I Wipe My Ass With Showbiz.” It’s very interesting to see how these songs evolved. But what is also great about the Black And Blue Demos is that they even include the song “The I Hate ____ Club,” which didn’t make it onto the final album. Even demos of “Skid Rock” and “Gut Sick Companion,” both of which would come out on later releases made it into this collection.

The actual physical piece was done quite nicely. Career Suicide…10 Years Later comes in a high quality double gatefold. The gatefold itself is filled with alternative artwork of people wearing horse masks, but acting like people. The front cover amusingly has a the framed original Career Suicide hanging over a horse-headed couple’s bed. The release comes in three different variants of heavy vinyl. It comes in the regular black, “Sox” (red and white marble with blue splatter) and Celtics (half kelly green, half white with black splatter). Overall, the design from the artwork to the choice of vinyl color was fantastically done.

But while this piece is great, there are a couple of minor issues that are somewhat noticeable (and yes, I know that I’m being a picky vinyl nerd). The first one being that the sales on the discs are really differentiated except for the graphics on them. Both say “Side A” and “Side B” and neither have the track list nor the disc number on them. So it’s a little confusing to figure out which one contains the actual album and which one contains the Black And Blue Demos. Having the disc that has the demos labeled “Side C” and “Side D” would have made things a little easier. Granted, the only way to tell is if you keep them in their respective jackets. The jacket with the original album has all the lyrics and liner notes on it while the other one just has some more artwork on it. Also, the gatefold itself has the track list for the original album, but not the track list of the demos. Thankfully, the release comes with a download card of all of the tracks so you can see the whole track list and take the songs on-the-go.

There is no question that A Wilhelm Scream’s Career Suicide was (and still is) a major accomplishment of the band’s career and they did a hell of job with its tenth anniversary reissue. The album will most likely always be one of their stand out releases in their discography and for us fans hearing the demos of those songs along with others that are even on the record makes Career Suicide…10 Years Later a very special treat. Melodic hardcore and thrash fans that are just checking out A Wilhelm Scream for the first time should probably wait on listening to this release in particular until they hear the band’s other records before hand (including Career Suicide). Clearly this is a release oriented for long time fans of the band. For those that do get it, they certainly will not be disappointed to say the least.

By the Grace of God: Above Fear