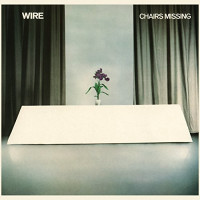 When it comes to punk bands that are hugely influential, but never garnered the cultural admiration of their peers, one need look no further than Wire. Their 1977 debut, Pink Flag, was raw, jagged, and its influence could be heard in bands from Fugazi to The Minutemen. One year later, they’d release their equally powerful sophomore album Chairs Missing.

While Pink Flag took a minimalist approach, with only one song extending into the three minute range, Chairs Missing featured more complex songs with several songs moving well past the three minute mark. Mike Thorne, who also produced the album, added keyboards to a sound that had previously been composed solely of guitar, bass, and vocals. These added textures would also expand the band’s sound moving forward as future albums would continue to feature keyboards and also starting including woodwind instruments.

Whereas the jaggedness of Pink Flag would be traded in for Eno-esque soundscapes, the lyrical direction would also change up on this album. The lyrics and vocals would become more in line with mood pieces, in the process helping lay the groundwork for what would later become post rock.

The members of Wire were musician’s musicians, which likely is why they didn’t garner the chart success of their peers. Every song on this album is masterfully crafted, though lacking in regard for more traditional pop song structures. Because of this, the band suffered from what could easily be called Velvet Underground syndrome. While not many people bought their albums, a lot of them started bands. And many of those bands were not only very good, but gained more recognition than the band(s) who inspired them.

Wire would follow this album with the equally stunning follow up, 154, a year later. Between the three, Wire could easily be said to have had three of the most productive years in the history of punk rock. One could even argue that outside of the Rolling Stones run from 1967 to 1969, The Beatles from 1966 to 1968, and Dylan’s run from 1964 to 1966 that Wire had one of the most prolific three year runs in all of rock music. Chairs Missing was a brilliant piece in the middle of that prolific run.

The band’s influence stretched from bands like Minor Threat and Black Flag to The Cure, Guided By Voices, and R.E.M. While the earlier more jagged work could be heard in those punk bands, the song structure and tonal changes that started with this album, can be heard throughout the work of the others.

Dead Boys: We Have Come For Your Children