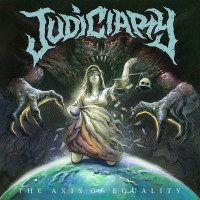 I understand that it might be a bit lazy to compare Lubbock’s Judiciary to their east Texas confederates – Dallas’ own Power Trip, so I’ll settle for an amended comparison. Judiciary does share some common ground with Power Trip, but we’re talking Power Trip circa Armageddon Blues. While I think Manifest Decimation and Nightmare Logic are both fantastic metal records, they were slightly removed from the signature crossover sound that the band was known for before signing to Southern Lord. Also, both LP’s had a very dark and dingy vibe that Armageddon Blues lacked.

It’s that type of clarity, both in the recording quality and in the musicianship that I hear on Judiciary’s debut EP, The Axis of Equality. The band spends the record’s woefully short runtime doing an impressive balancing act between hardcore and thrash metal. All the crossover tropes are present: meaty snare hits, precise, breakneck riffing, and raw, mid-range vocals. If Power Trip doesn’t sound like an accurate comparison, I’d say the old-timers might hear a little S.O.D. or Carnivore in the band’s sound. Younger fans might be more inclined to draw parallels to Violation or a heavier Municipal Waste. But no matter what decade you’re from, Judiciary’s approach to crossover and hardcore is energetic, heartfelt, and tough-as-nails.

Axis was released back in 2016 and since then Judiciary has self-released a split with Calgary’s Mortality Rate. I found Judiciary’s side to be the better of the two, though if you’re into heavy, female-fronted hardcore with a bit of a Hope Con vibe, you’ll probably enjoy Mortality Rate as well.

The Axis of Equality, their split with Mortality Rate, and Judiciary’s excellent 2014 demo are all available at the band’s Bandcamp page (judiciarytx.bandcamp.com). Hopefully by the time you’ve digested Judiciary’s existing material, they’ll be hard at work on what I’m sure will be a kickass full-length of more head banging insanity.