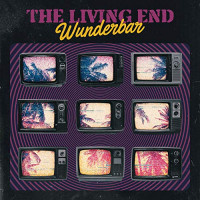 The Living End’s last album, Shift, came out in 2016, shortly after I began writing for Punknews, and it became the first album that I gave five stars to. Would I still give it five stars today? I’m not sure. My opinion of the album hasn’t changed, I still think it’s a near perfect album and a huge comeback after the previous four albums failed to live up to the promise of the first two albums. But now that I know how rare five star reviews are supposed to be around here, maybe I would rethink that one today. Still, Shift is an astounding masterpiece of darkness and vulnerability. Its follow up, Wunderbar, however, pales in comparison to Shift, delivering a very uneven collection of songs.

Wunderbar doesn’t really have any bad songs on it, it just doesn’t really have many great ones. It’s an album steeped in mediocrity. What’s more, the songs feel separate from each other and never really congeal into a coherent whole. “Don’t Lose It,” with its constant Jam references of “In the city…” gives a decent, if underwhelming kick off. The next two songs, “Not Like the Other Boys” and “Otherside” are valiant efforts that achieve little more than mild amusement. “Death of the American Dream” is a strange title for an Australian band, although frontman Chris Cheney has lived in the US for seven years now. Musically the song is a throwback to the psychobilly days of early Living End, but lyrically the song comes across as heavy handed, with a lot of jarring visual imagery that never seems to add up to any real meaning. Halfway through the track, it abruptly and bizarrely switches over to a folk song that sounds like a completely different song with the same chorus.

“Proton Pill” is the most genuinely punk song on the album, yet plays with punk conventions to make for the album’s best song. The acoustic ballad “Amsterdam,” more than any other song, sounds like it could belong on Shift with its surprisingly similar tone to “Keep on Running.” “Rat in a Trap” closes the album out with some more throwback psychobilly style, but takes some bizarre liberties and tops it off with lyrics that are somehow cliched and nonsensical at the same time.

It’s easy to write off The Living End because of how uneven their catalogue is. But dig through it and you will find three outstanding albums: The Living End, Roll On (one of my favorite albums from any band) and Shift, the last of which proved that they can come back after several weak albums to knock one out of the park. Unfortunately, Wunderbar is a mediocre addition to their catalogue, rather than a follow up on the excellence of Shift.