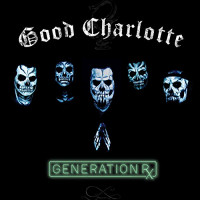 Good Charlotte’s 2002 sophomore album The Young and the Hopeless is a definitive pop punk album whether you like it or not. They used to be the boy band of pop punk: the emotional lead singer, the “punk” guitar-playing twin brother, the talented, emo guys. They followed it up with some hits but never returned to those heights. And, realistically, they didn’t have to.

The band members are now in their late thirties and the Madden twins have both overshadowed their music with high profile romances. 2016’s Youth Authority, their first release following a six-year break, proved they’d lost touch with the scene they grew up in. However, in that same period of time, young bands and SoundCloud rappers started citing Good Charlotte’s influence and it was hard to dispute. But like Youth Authority, their new album Generation Rx does nothing to return them to their place in pop punk.

The first three proper songs all aim for modern rock radio. Titles like “Self Help” and “Actual Pain” are meant to be genuine, but they’re underwritten, relying on tired clichés like, “searching for the meaning, I’m living in these feelings” and “Alone inside, I wish that I could die.” And the worst part is their intentions seem good. It’s the execution that’s lazy. Adding EDM-flourishes and pitch shifting vocals don’t update these songs for 2018 nor do they firmly reestablish to their roots.

Generation Rx lives in the in-between. Mid-tempo pseudo-ballads aren’t the right fit. Good Charlotte can write giant hooks, even here, each song has one. “Prayers” is a soaring song that just misses the mark. That and “Leech” would fit perfectly on Linkin Park’s last album. The piano and acoustic guitar of “Cold Song” feel like a more natural place for the band. It’s by far the best song here and finds them aging into the elder statesmen role. Joel sings, “I want you to know, you’re not alone […] Life’s funny, it’s a game we play and you know we run” and it’s the most honest he comes across.

Pop punk comeback stories have been happening a decent amount recently. NFG’s last two albums, MXPX’s new album, and, sue me, blink’s California are all better than they have any right to be. They may not resurrect their glory days but they show a glimpse of what we once loved. Unfortunately, Generation Rx does not. Good Charlotte know how to write a hit and a hook but their honorable intentions to be memorable fall short.