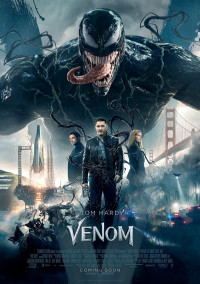 When Sony announced it was doing a Venom solo movie without Spider-Man, yeah, that left me a bit worried. Not sure why the studio insists on trudging forth with characters like Black Cat, Silver Sable, Morbius and Kraven as well, when it's clear they work BETTER with their main antagonist, Spidey. However, given how Marvel made Venom (whether it be the Flash Thompson or Eddie Brock version) into an anti-hero over the years, I gave Sony the benefit of the doubt. Sad to say, Ruben Fleischer's movie here barely survives, and by the skin of its teeth.

Tom Hardy's Rocky Impression (which feels like his roles in Warrior and as Bane are compressed into one as Eddie) first threw me off but he's one part of the film that grows on you. His banter with the alien symbiote that turns him into a reluctant hero isn't half-bad, but that's the only thing Venom has going for it. Michelle Williams and Riz Ahmed (as the evil symbiote Riot) all phone it in, and the script just rambles along, building to see Venom and Riot going at it like a bunch of Hulks. The CGI's not bad, but everything else from the dialogue to the action feels like the 2000s via movies like Daredevil and The Incredible Hulk.

One would think Sony would have learnt from the MCU and from rebooting Spidey twice how to make a character we're emotionally invested in. They stripped away the violence and cursing, as well as the horror factor which could have made this a solid R-rated flick. After all, a grimier tone sticks to the character's brain-eating essence. Instead we get a diluted quippy Venom that feels like when Fox held back Wolverine and made him PG-13. Sony should have been following James Mangold's Logan, letting a dark character and dark story be, well, dark.

Ultimately, apart from a couple head bites, the film leaving us praying Spidey gets to face off against the anti-hero for excessive use of violence someday or that Marvel chucks him into the Guardians of the Galaxy.

There is potential to dive into the current run from Donny Cates' comics with an action-horror featuring Knull (the symbiote god) and Venom's Klyntar race, but as it stands, not even a Carnage-oriented sequel can get me hyped for what's to come. Sony really dropped the ball and it's one the Spider-Verse will struggle to hold up.

PS - the Eminem track is trash, but hey, at least Run The Jewels' "The Royal We" is lit as you young people would say. Oh, the mid and post credits do make up for the nonsense that you just wasted 90 mins on.