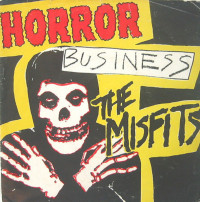 If a punk single can be judged by how many times it’s been bootlegged, then Horror Business is an undisputed classic. The official 1979 pressing was 2000 on yellow vinyl, but that only represents a tiny fraction of the records floating around out there. The Misfits’ third single was probably most important for another reason. It was their first release to feature The Crimson Ghost, the iconic skullface image that would become synonymous with the band. That picture would help the band sell a million T-shirts, even if they never achieved a platinum album.

A-side, “Horror Business”, is undoubtedly one of the Misfits best known songs. It featured the great early lineup of Glenn Danzig on vocals, Jerry Only on bass, Bobby Steele on guitar Joey Image on drums. Some pressings, legitimate or not, contain an insert that claims the songs were recorded in a haunted house. It asserts that there were unexplained voices in the background, especially on “Teenagers From Mars”. The story was total BS, but only added to the band’s scary reputation. The lyrics of “Horror Business” are a bit ambiguous, but certainly seem to be inspired by Sid killing Nancy.

B-side, “Teenagers From Mars”, was a wonderful science fiction inspired song that punks could easily relate to. “Teenagers from Mars/And we don’t care” served as a rallying cry for all the disenfranchised. The other B-side would probably never fly today. That being said, “Children In Heat” is obviously not meant to be taken too seriously. It’s clearly more about youth rebellion than child sex. All the Danzig era Misfits songs are essential, and these three are no exception. It’s worth having a vinyl copy of Horror Business, even if it is of questionable origins.

Direct Hit!: Crown of Nothing

The Misfits: Night Of The Living Dead [7-inch]