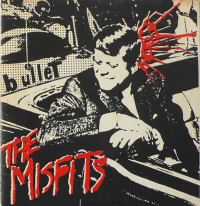 If a list of the best ten punk rock 7-inches of all time was made, The Misfits’ Bullet would easily make it towards to the top. This four-track EP was not only way ahead of it’s time when it was released in 1978, but it also gave us four classic horror punk tunes and influenced several generations of punk bands in the following decades.

The title track was the most hard-hitting of the four. Between the brutal lyrics and faster, darker, and edgier take on the Ramones’ music style, it really set the tone for the rest of the EP and the band in general. Glenn Danzig’s vocals were fierce and angry and they were some of the earliest examples of his masterful singing that would serve him well decades later. Though it was just as popular, if not more so, “We Are 138” slows things down for a bit. Danzig’s vocals took a more drone-like and melodic turn. The marching beat led the bumpy rhythm guitar and bass until the song grew faster and more intense towards the middle. Similar to “Bullet,” “Attitude” also borrowed from the Ramones’ downstroke formula, but The Misfits upped the speed and incorporated lyrics more blunt and even violent lyrics, which back in the day was a very gutsy move. The fourth track “Hollywood Babylon” really stood out among the four songs on this EP. Of course, it contained some of Danzig’s fantastic melodic vocals, but this one was much more bass-centric. The guitars were much cleaner compared to the other tracks and even the band’s latter material, and yet “Hollywood Babylon” packs just as much of a punch as the others do.

From the album art to the four amazing songs, the Bullet 7-inch was not just a legendary Misfits release, but it has had an incredible impact on the young punk rock genre at the time. You can’t say that about many albums, let alone EP’s. Each song was and still is an absolute classic and a go-to when fans even forty years later would listen to The Misfits.

The Misfits: Night Of The Living Dead [7-inch]