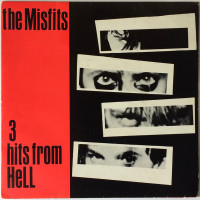 Upon releasing Night Of The Living Dead in 1979, the Misfits travelled to England to support The Damned with a rumor of possibly opening for The Clash, though the latter shows never came to fruition. While in England, Danzig got thrown in jail for getting into a bar fight and Joey Image quit the band and flew home. And when the rest of the band returned to America, they regrouped, adding Arthur Googy on drums and replacing Bobby Steele with Jerry’s younger brother Doyle who had been hanging around rehearsals, waiting for his turn to be a Misfit. And it was with this lineup (Danzig, Only, Doyle, and Googy) that the band released their next 7-inch, 3 hits from Hell in 1981.

While half of the band had changed, the sound remained the same. Though the A-side, “London Dungeon” (which Danzig wrote while in jail in England), was a slower tempo song, it still featured that sloppy, yet smooth sound via stomping drums, raw guitar sounds, and ominous background howls with extra guitar sounds from Bobby Steele. It was on this song that we fully heard Danzig’s Orbison-esque vocals, though it was somewhat prevalent on previously released songs like “Cough/Cool” and “She”.

The b-side sped things up a bit via “Horror Hotel” and “Ghouls Night Out.” The first song contained a simple chord progression with loads of cymbals, pounding drums, and a driving bass. The second song was slightly more complex in regards to the music and rhythm and served as the most melodic song on the release. Once again, it was Danzig’s vocals and lyrics that were the highlight of these songs. When he croons "Hell is where you want to be. I feel the hell on you and me. I feel it everyday,"  on "Ghouls Night Out", you had to remind yourself that he was singing about eating flesh.

The beauty of The Misfits is that they were a horrible contradiction. The songs were simple in theory, yet they were hard to imitate. On these three songs, Danzig’s vocals were powerful, yet smooth; a complete juxtaposition to the raw sounds of the guitar and drums.  And this release was another great example of beautiful melodies with horror-filled lyrics.