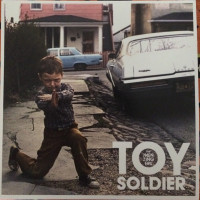 In 2017 The Menzingers graced us with their wonderful fifth studio album After The Party. In 2018 they did not release another full-length, but they did put out two new songs. In May the band digitally released the tune “Toy Soldier” and then “The Freaks” in October. And for their October/November US tour The Menzingers made these two tracks available on a 7-inch that fans could pick up at those shows.

Long time Menzingers fans know that the band’s vocals are led by Greg Barnett or Tom May. For side-A’s “Toy Soldier” Greg Barnett sings lead. The track is filled with his signature gravly, high-pitched peaks and he’s his backed up with very soft “oooh’s” during the choruses. On the musical side, the one guitar plays a steady chord progression while the other lets out these sleek one-time strums. During the pre-choruses, there is this great build up from the snare drum which adds a lot of tension and anticipation to the chorus that follows. “Toy Soldier” has a very steady rhythm until it is chopped into the chorus where it slows down quite a bit and Greg’s vocals are sort of mimicked by the riff that is played in between his lines.

The song that fills side-B of this 7-inch is “The Freaks” where Tom May sings lead. The track starts off with Tom singing over very softly plucked notes. This continues until after the slight build up where the everything shifts into gear and gets much louder. The guitars get incredibly distorted, the drums are slammed harder, and Tom’s vocals go from soft to bolder and more aggressive, but at the same time they stay very melodic. There is also a very bright guitar solo that is filled with swift hammer-ons and screaming bends.

Both “Toy Soldier” and “The Freaks” come in classic Menzingers fashion — incredibly catchy melodies with lyrics filled with imagery, that give you a sense of nostalgia, on top of masterful musicianship. If you were a fan of After The Party, chances are that you will really dig these tunes. This 7-inch is a fantastic “add on” to After The Party that should hold fans over until their next full-length comes out.