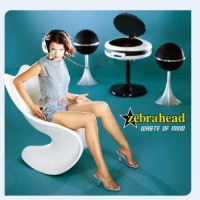 Whenever I write reviews of Zebrahead on this site, I feel the need to constantly remind you that, while I enjoy them a lot, I understand that they’re not actually good. Honestly, Waste of Mind holds a very special place in my heart because I was in high school when my friend Mike turned me on to Zebrahead and I fell absolutely in love. I love when rap and rock combine, and especially when someone combines rap with punk, but it’s so rarely done well. Prayers for Atheists combined punk and rap very well, but were very short lived. The Transplants don’t have a great rapper but he certainly has street cred, and musically they’re just about perfect. And then there’s Zebrahead who sound exactly like what you’d expect to hear if the least tough people you ever met put together a punk/rap group. But damn, they’re so much fun.

The album kicks off with “Check” which is a pretty problematic song that’s summed up in the really messed up line “Be true to the color that you are born with/Not the fucking color that you’re adorned with.” It would be a little more problematic if Zebrahead’s rapper wasn’t a person of color, but it’s still a kind of messed up thing to say. Still, the song absolutely balls-to-the-wall rocks in a combination of punk and funk. Then you get to “Get Back,” their first ever single, and it’s a musically a perfect punk meets hip-hop song that gives rapper Ali Tabatabaee space to spit out furious nonsensical rhymes while still keeping a powerful punk punch. One line in “Get Back” that hasn’t aged well is “Gotta get the dough like my man Donald Trump.” I recently asked the band on Twitter how much they regretted that line now, to which they responded “Lots and lots.”

“Someday” is probably my favorite song on the album, and it’s cheesy as hell. It’s basically about being a teenager in high school and building up the courage to ask out a girl. Tabatabaee builds up the atmosphere with a lot of visuals about high school while original singer Justin Mauriello—who would later leave the band to start the band I Hate Kate, which later changed their name to Darling Thieves—really sells the emotional side of the story. Some of Tabatabaee’s lyrics fall short of perfect like “Coming straight out the block/Punk rock ain't no shock/Blue hair everywhere cause we got the stock.” While I get what he’s saying there, the word “stock” doesn’t really make any sense in that context. He just needed a word to rhyme with “shock.” “Walk Away,” “Big Shot,” and “Swing” through in a big 1-2-3 punch of hard rock with funk. “Time” is a pretty overlooked song because it’s basically the closest that Zebrahead has ever come to producing a hardcore song, and it’s certainly fast and furious. But then it comes time to talk about the elephant in the room: disco.

When I wrote my review of Blondie’s “Parallel Lines” for 70’s week, I talked about how controversial it was for Blondie to include a disco song on their otherwise pop-punk album and how much the punk community resented them for that. Here we are with Zebrahead 20 years later and the album ends on a disco song (“Fly Daze”) followed by a disco funk song (“Booylicious Vinyl”). On top of that, there are songs earlier on the album, like “Feel This Way,” that incorporated disco into punk. I don’t want to say that there were fewer repercussions for Zebrahead than for Blondie because that’s an unfair comparison since Zebrahead never really took off outside of Eastern Europe and Asia, and even that took a few albums to achieve. But it is interesting that, amongst those few of us who even care about Zebrahead, almost nobody calls Zebrahead traitors for being a punk band playing disco, and I think that that’s because, in 1998, disco was a retro joke rather than a modern trend. Neither of the disco songs give rapper Ali Tabatabaee much to do, so it’s mostly Mauriello on the lyrics. “Fly Daze,” which is introduced by notorious creepbag Ron Jeremy, is mostly just a song about 70’s nostalgia that nobody in Zebrahead was actually old enough to have remembered. “Bootylicious Vinyl” is almost entirely a joke of a song with Mauriello and Tabatabaee exchanging the same four lines over and over again, ending up sounding absolutely ridiculous.

Their second album, Playmate of the Year, would jettison a lot of the funk and disco elements, accommodating Tabatabaee much less and forcing him to desperately try to figure out how to rap over more conventional pop-punk songs. It would take them a few more albums to really find the right balance of punk and hip-hop again, but they kind of had just the right balance to begin with on their first album, Waste of Mind. It was just that Zebrahead has always been chasing stardom, which is not going to happen in the US until we’ve all culturally forgotten the disaster of the late-90’s/early-2000’s rap-rock movement. They’ve tried everything, including trying to make Tabatabaee scream more in hopes that people didn’t even realize he was a rapper. It was only recently on Walk the Plank that they stopped chasing the limelight and accepted that their fame will always lie outside of their home country which allowed them to relax and ease back into what comes naturally to them. Had rap-rock never exploded into a cultural joke bigger than disco and Zebrahead hadn’t started contorting themselves into unnatural sounds to avoid the fallout, and instead spent their career actually evolving the sound they started with on Waste of Mind, who knows where they would be today.