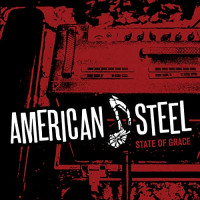 American Steel are back. Hopefully. And the new “State of Grace” single should squash any worry that the band have returned any less than 100 percent.

“State of Grace” is pure fire. The track could easily fit on either Destroy Their Future or Dear Friends and Gentle Hearts. Rory Henderson’s swaggered vocals are turned up and the music is full force behind it. The chorus is big, demanding a singalong.

The Ryan Massey led B-side is aptly titled “Should Have Died Young (Playing Rock and Roll)” and is a kindred cousin to The Lawrence Arms’ “Seventeener.” These guys are seasoned veterans, returning to punk music when they can make it work.

The single is a tease. But if the huge time gap results in anything half as good as Destroy Their Future, then I’m anxiously waiting.