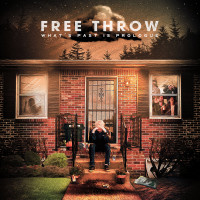 I've listened to this record quite a bit and finally sitting to type it up today, well I had to muster some courage and nerve because of the messages it preaches against mental health and depression. And as you all know, we've lost a dear Punknews community member in Britt Strummer, so honestly, it'd be remiss of me not to really dig into why Free Throw's What's Past Is Prologue may be one of the most needed records of the year.

It covers so many issues, but most of all, it dives into us as frail, vulnerable humans. Which is okay. We need to understand that feeling defeated and losing is okay. This album eerily reminds me (lyric-wise) of Sorority Noise and The Hotelier in how candid it gets covering such hard-hitting topics, and what I admire about Free Throw is how far their musical style and narrative have come since Bear Your Mind. I reviewed that a couple years ago (sadly, I missed last year's EP) and I'm glad their sound sounds fuller, louder and way more dynamic now, and it's an interesting approach when you let the duality of what they're singing sink in. Emo-punk, angsty screams and gang vocals that talk about not wanting to get out of bed, about feeling down and alone, and reminding us to reach out if we're sad... or we think someone is.. are all powerful messages, and they're gutting me right now as I keep remembering how many people are paying tribute to our very own Britt.

Free Throw acknowledges depression as a beast, a monster we need to power through, but not alone. And that's why the "sadboi" style isn't something in their approach. It's breakneck speeds for songs like "Tail Whip, Struggle" and "The Corner's Dilemma" which I'd love for them to throw out at young audiences who need to be reminded about PMA -- heck, I wish they'd play this back-to-front at a Warped Tour because it feels like an album that's right for the times we live in. Think of Neck Deep, Stickup Kid, The Story So Far, with the mathy buzz of Tiny Moving Parts, and that's this album in a nutshell.

When they need to dial it back too, it's done so tastefully -- "Stay Out Of The Basement" has that Modern Baseball draw to it, while the shimmery essence of "Monte Luna" acts as a reminder that while we fight through the dark days, sometimes we do need to take breaths and rest. We're human, after all. And that's what this album is mostly about -- accepting flaws, learning from the past and letting it inform our future. Even if in the now we feel broken, don't think you're alone. Communities build these pieces of you back up -- friends, families, strangers at punk rock shows -- and let's do our best to remind each other of this. After all, it's what Britt would have wanted, and I know it's what Free Throw wants for fans and non-fans alike.

Ellen and the Degenerates: Return of the Herb