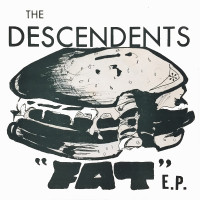 When the Fat EP was released in 1981 the Descendents were relative unknowns, they’d released a single in 1979. But, that was prior to Milo Auckerman taking over on vocals and the band’s sound becoming more rooted in hardcore punk.

In less than five minutes, the band would tackle topics like food on “I Like Food”, parents on “My Dad Sucks”, and a fishing trip on “Mr.Bass”. While punk rock wasn’t strictly political at this point, there weren’t many bands writing up what most people would call the mundane realities of everyday life for a young person at this point. So, before even touching on the musical elements of this album; we have to touch on the thematic elements of it. This wasn’t The Clash singing about politics, Buzzcocks writing love songs, or the goth punk of The Damned. These were bored young adults singing about being bored young adults. We can argue about guitar tuning, melodies, and vocal stylings all day long when it comes to what puts the pop into punk. But, band writing about these topics is what made for a great pop song. For, perhaps the first time, largely apolitical American latch key kids had a punk band they could call their own.

Musically, the band understood what a pop hook was too. If you’re expecting things as perfectly executed as you’d found on their albums from the late 90’s and early 2000’s you’ll be disappointed. But, even on the first EP, that this band understood what a pop hook was. They understood that just because they wrote a guitar part or bass line that got stuck in your head didn’t disqualify you from being hardcore. And given the, at times, harsh nature punk rockers judged bands with; the first hardcore bands to incorporate pop elements into their sound were kind of risk takers. They knew they weren’t going to be MTV darlings, like their … well descendants would end up being. They also likely didn’t know if the people listening to Black Flag, The Weirdos, or Agent Orange would take them seriously either.

In terms of the influence this release had, given the career it launched one could say that it’s immeasurable. I think that’s a bit too easy though. The doors this EP opened and the career it started are immeasurable. But, this isn’t Milo Goes to College or I Don’t Want to Grow Up. The songs are good, but you’re unlikely to find them on a mix someone puts together for their friends the summer they discover punk rock. This EP is very important. But, the band would write better, more memorable songs and they’d grow considerably as songwriters in the next five years or so.

The Descendents: Milo Goes to College

The Descendents: Ride the Wild/It's a Hectic World