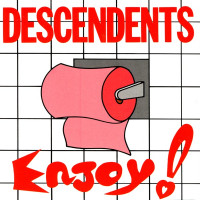 There are no shortage of things to talk about when looking back on this record. It certainly wasn’t entirely well-received at the point of release, for a start. People were perfectly happy to be critical of the puerility of some of the subject matter (and in the case of “Orgofart”, the literal content as well), the heavy metal influences on tracks like “Hurtin’ Crue” and “Orgo 51”, the fact that one of the best songs on it is a Beach Boys cover, the dark expansiveness of “Days are Blood” and plenty more things besides. Basically, a lot of people wanted more of the same that they got on 1985’s I Don’t Want To Grow Up. Yet ironically, when that unwillingness to grow up manifests itself in references to shitting and farting, extending to the album artwork and lyrics alike, I guess some people felt that it cheapened the message of ‘not growing up’ and it’s kind of hard to argue listening to the record now. Ray Cooper (guitar) and Doug Cooper (bass) both left the band after the record’s first supporting tour (of two) as well, which in retrospect gives an even more chaotic view of what might have been happening in the band at the time, although they all described the departures as ‘amicable’.

Despite all of this, I wouldn’t say that this album is anything less than flawed. There are still plenty of amazing tracks which are closer to the classic Descendents template if you’re not into the more experimental (or scatological) stuff. And although the main talking point is still that there seems to have been a bit of a departure stylistically/thematically, I think you could still make a good argument for “Sour Grapes”, “Get The Time”, “Cheer”, “Green” and “Wendy” being absolutely essential Descendents listening. There are points during this record that are exactly what I want from Bill, Milo and co. and given it’s their third record, people being down on their trying some different things seems unfair. Maybe they don’t all work, but experimentation is rarely a bad thing. On which subject, I should confess I’d not listened to this record for a little while, but at this point, I can trace back a lot of my musical tastes to so many of the weirder parts of this album that now with hindsight, I just find it a really interesting and engaging listen.

As per usual, Bill Stevenson was at the helm in terms of production, leading to a familiar sonic approach. Stevenson was also primary songwriter for the record, although all the band contributed at various times – including a number of tracks where Bill wasn’t involved at all and Milo Aukerman took the lead. These tracks, it could be argued, include some of the record’s strongest material, interestingly. Ultimately, the record is inconsistent in style and quality – with wild flights of fancy, experimentation, signs of what the band were into at the time and maybe some of the troubles they may have been experiencing along the way, interspersed with some genuinely classic tracks…and then some of the most infantile lyrics and imagery ever committed to a record that sold as many copies as this.

Be it nostalgia, rose-tinted glasses or just the fact that I honestly believe that this record helped in a number of ways to form and develop my musical tastes…I really love it. Well. Most of it. “Orgofart” is kind of funny once. After that, not so much. But Descendents wouldn’t be who they are without this record and that counts for a lot in and of itself. And if you’re not having a great time when you’re listening to “Sour Grapes” or “Get The Time”, then I’m guessing Descendents aren’t for you. It ain’t perfect, but when it’s at its best, it’s absolutely fucking brilliant.

Descendents: I Don't Wanna Grow Up