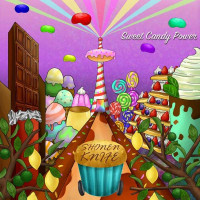 When it comes to pop-punk, there are a lot of names that get thrown around as being at the forefront of the genre. One band that doesn’t get enough credit, are Shonen Knife. Hailing from Japan, they’ve been putting out infectiously poppy punk rock since the early 1980’s. While their early work was primarily in Japanese, they were still able to capture the attention of American audiences to the point K Records began releasing their material in 1985. By 1991 Kurt Cobain, who was a huge fan, asked them to open on the UK leg of Nirvana’s tour that year. Less than a year later, they would sign to Capitol and release their major label debut Let’s Knife. Almost thirty years, and a handful of lineup changes later, they released their latest album Sweet Candy Power.

The title is a perfect fit for the album, as the music is infectiously sweet. The band also shies away from material that is deeply personal or political for a record that is just a lot of fun. This is especially apparent on tracks like “Dizzy” and “Ice Cream Cookie Sandwiches”. While the Descendents have written a number of memorable songs about food, Shonen Knife certainly gives them a run for their money here. And they do so, while leaning as heavily on The Beatles and 60’s girl groups and they do bands like The Buzzcocks.

The whole album isn’t as sweet as dessert though, while the band does keep things lighter on this album they also write about their home country and the political apathy they see there on “My Independent Country”. Even when tackling heavier subject matter like this, the band doesn’t delve into the outright anger of bands like Anti-Flag or Leftover Crack. They’ve found a way to make songs that aren’t necessarily bright and happy sound that way. This, if you’re familiar with some aspects of Japanese entertainment culture makes the song more likely to find a place in the psyche of the people in their homeland who most need to hear the song. In short, while the approach may not make sense within the constraints of American punk culture, this song was not written for us.

This album isn’t likely to convert people over to the band, they have an extensive back catalog that is worth your time though. And I do encourage you to dig into it, especially if you enjoy pop-punk. The ability of this band to blend their unmistakable pop sensibilities with their love for punk rock is first rate though. They are a band that is as deserving of being mentioned in the history of the genre as any of their peers who come to mind when you hear the term pop-punk. With this album, they’ve released something that while not ground breaking, is as vital as anything their peers still hanging around from the 1980’s have released in recent years.