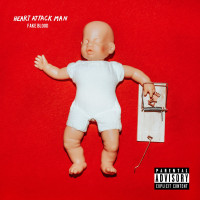 Heart Attack Man’s 2017 debut The Manson Family has become one of my favorite albums of the last few years. Its reverb-soaked production and soaring power pop hooks brought a huge charm to what could easily have been another cliché puree of 90s alt rock sounds. Two years later and they’ve offered up their sophomore album, Fake Blood.

Just one listen to the title track/opener/lead single gives you a pretty good idea of what you’re in for. Heart Attack Man have sanded off their trademark grit, but have become razor sharp in the process. Fans of their first album may find it a bit sterile, but it’s still a charming song. It helps that the band hasn’t lost their ability to craft hooks (seriously, the chorus will be stuck in your head for weeks.) Songs like “Sugar Coated” and “Cut My Losses” are also jam-packed with vocal and guitar melodies that will satisfy any power-punk fan’s need for catchiness.

Another new direction for the band is in the lyrics. On The Manson Family, frontman Eric Egan felt defeated and apathetic. On Fake Blood, he feels angry – and has a hitlist. Lyrical motifs frequently include hatred, guns, suicide, and of course, blood. While the noisy solos and pseudo-melodicore moments (see: “Crisis Actor”) help this work, I can see the lyrics being a little too edgy for some. Heart Attack Man are a young band with a young fanbase who will eat it up, but it may be too much for older people to stomach.

Although musically the band mostly sticks to their guns, there are a few attempts to branch out beyond their fuzzy minor chords. “Moths in a Lampshade” reminds me of when Polar Bear Club attempted to do slower/softer cuts. While you can appreciate the band for trying to do something different, it feels a little half-baked. Egan pulls off his tamer vocals well, but the instrumentation is definitely lacking. I also find it kills the flow of the middle chunk of the record, which as mentioned before teeters on the edge of melodic hardcore at points.

Despite a few missteps, Fake Blood is a worthy entry in the power-punk zeitgeist. If you’re a fan of this new wave of hardcore bands trying to sound like Pixies (Drug Church, Gouge Away, Culture Abuse etc.), you’ll probably fall in love with this band, even if they’re somewhat an inverse of the aforementioned trend. Otherwise, it’s a proficiently bitter power pop album that likely won’t wow you, but will certainly make your bad days a little better.