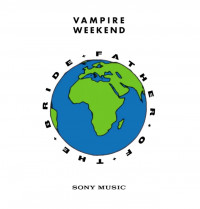 So it's time to get really punk with Vampire Weekend. A darling indie act, made for college radio and for folks who love being emo on the downlow, Father of the Bride is the closest I'd say Vampire Weekend would ever come to giving us a true sequel to 2010's Contra. The latter was one of their most melodic pieces of work ever, and I'm glad this album's been worth the wait since 2013's Modern Vampires of the City -- which admittedly left a lot to be desired. A big thing I've been dissecting, though, is what exactly makes this record stand out, in a way not even their self-titled debut did 11 years ago. And it dawns, it's simply frontman Ezra Koenig channeling a lot of his emotions towards the love of his life, Rashida Jones.

Now, Ezra's done this schtick to death, but this album has a more mature twang to it, musically and lyrically. And interestingly enough, it's pretty minimalist and their simplest-sounding stuff to date. Rostam Batmangjli (previous guitarist) leaving them as a three-piece had me wondering as I loved their ingenuity with him, but honestly, they made it work as less intricate really does mean more at times. It also helps female vocalist, Danielle Haim, really shines through supporting Ezra on so many songs (like the wedding-esque opener in "Hold You Now") that my gripe is I'd for her to actually be more than support and really take the mic some more to work a partnership with Ezra. If anything, this album screams this is the way to evolution for the band.

As for the other tracks, well, it's a front-loaded album to say the least. You've got songs to dance, bop and sing along to like "Harmony Hall" and "Bambina" -- the latter of which might be their best (and fuck it's so short) song along with "Giving up the Gun" from way back when. Now, there are some middling material like "How Long?" which does decently enough to capture and keep you with its synth beats. But there are truly forgettable jams like "Unbearably White" and "Rich Man" in terms of musical style. They feel like B-sides or songs that should have been stuck on an EP as they kill the momentum here. Ironically, they're really well-written so if you're down for the lyrics, you can power through. The same goes for the mariachi-driven "Sympathy".

In terms of what really failed, "Sunflower" with Steve Lacy tanks hard, feeling like it belonged on Superbad, while "Flower Moon" feels like the band rips off Imogen Heap. That said, it does end on a strong note with "Stranger" mixing Paul Simon in with edgier cuts of Motown/funk, so much so it actually feels like the Jackson 5 at times. And of course, the closers -- "We Belong Together" which is a cheesy-as-fuck indie stomp-and-sing-along a la the Lumineers; and lastly, the simple piano-fueled love song in "Jerusalem, New York, Berlin" which is all about traipsing around the world with the one you love. Or missing them when they're not there. Sappy as fuck, but hey, you're reading a Vampire Weekend review. The fuck you expect?

Magnitude: To Whatever Fateful End