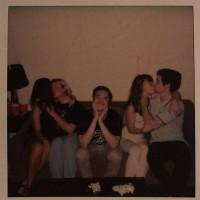 If you’re going to listen to Nothing Ever Changes - and, spoiler alert, I’m about to spend the next several hundred words making the case that you should - do so quickly. Not because the work will age poorly, and not because there’s a chance you can be some hipster cred Columbus staking a flag in native land, but because Daniel Tanghal, by all appearances, will not slow down for you.

Nothing Ever Changes is Tanghal’s sixth album in two years, and considering that his previous release, Galactic Guillotines of the West, has a completely different sonic palette (it’s much more electronica-inspired, where as Nothing Ever Changes is closer to Moldy Peaches-indebted folk punk), the evidence suggests that we’re dealing with the kind of manic artist who it’s easy to fall behind on.

In fact, let’s do the main bit of criticism here; the flaw of Nothing Ever Changes, in as much as it has a flaw, is that there isn’t enough of it. It has the Tony Molina problem. Over 11 tracks, only one song hits the three-minute-mark, with most clocking in somewhere around 90 seconds. There’s a strong case to be made that this kind of music - one singer, one guitar, one or two overdubs per song - demands that kind of economy, but even in brief stints, Tanghal displays the kind of perspective, personality, and songwriting chops that suggest something even better could be created with a little more focus and fleshing out.

Your personal choice for “Song I’d Most Like More Of” will vary, but for me it’s “You Should Break Up With Me.” That’s the one that starts with “Your too busy taking shots with the president of your local marijuana legalization party” and only gets better from there, unleashing the album’s catchiest chorus. Maybe yours will be “All My Friends do Heroin,” which is not quite about what you think it is, or “You Will Remain in Athens GA,” which is exactly about what you think it is.

What really sells all of this is Tanghal’s personality. At the risk of assuming the work to be autobiographical, he paints a picture of himself as an iconoclast among iconoclasts, a talent isolated both by his vision and what he won’t play ball with. He has a keen eye for detail (“Safety isn’t fun and you prefer revenge / so maybe you decided to destroy your friends” from “Fester” comes to mind) and an obviously creativity for how he cuts his lyrics into melodies (Try and guess where the line breaks are in this, from “played by Lucifer”; “I’ll have what you’re having, and I’ll drink what you drink, and I’ll smoke what’s in your pipe, because you seem alright).

Nothing Ever Changes creates the kind of interiority that great fiction archives. There’s a whole world going on just to the left of these songs. While it’s a minor disappointment that Tanghal doesn’t explore them here, I take solace in the notion that if I wait a few months, he’ll be back with more.

Bud Bronson and the Good Timers: Escape Your Brain