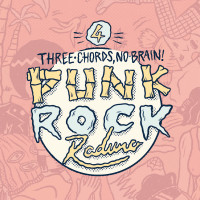 July 2019 marked the 4th installment of the Punk Rock Raduno Festival in Italy. The fine folks at Stardumb Records, in collaboration with other labels such as Moms Basement, have released a solid compilation to commemorate the event which includes one track from each festival performing band. For those who don’t know, Punk Rock Raduno is today’s premiere festival for all things pop punk, power pop and Ramonescore.

PUNK ROCK RADUNO VOL 4 is a great introduction to anyone new to the underground pop punk scene and will please old timers as well. The comp is a great mix of genre staples as well as new up and comers. Bands from across the globe are well represented. Italian pop-punk is well represented with tracks from the Livermores, Derozer, Gil Ignoranti and the long running Senzabenza who will probably be new to most (myself included!) Kevin Aper returns to the scene with “I Hate Pineapple” from his new band Sweatpants Party. Power pop fans will be extremely pleased with “Bubblegum Baby” from Norway’s Yum Yums as well as “Nothing But A Heartache” from the Kurt Baker Combo. Currently hot on the scene is Dan Vapid and the Cheats who offer the previously unreleased “Cloudy Day.” Flamingo Nosebleed offer a new track called “Hangover Girl” which will please the pickiest of classic Lookout Records-era pop-punk fans. Plenty other known and lesser known bands in the pop-punk bubble appear. The standout track of the comp for me would be “Happy Hour” by the McRackins which will have to singing and drinking along!

The Punk Rock Raduno fest and accompanying compilation will restore your faith in pop-punk and power pop. It was a pleasure to hear certain bands for the first time thanks to this release. This serves as a nice memento for those not fortunate enough to attend the festival.

Bud Bronson and the Good Timers: Escape Your Brain