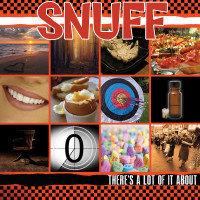 I don’t think Snuff really gets enough credit within the punk rock community. Despite some great albums and successful tours during their long tenure, they seem to fly under the radar, particularly in the United States. I don’t know if their new album, There’s A Lot Of It About, will change any of this, but they have produced another solid record that most fans of the band should enjoy.


It’s tough to define their sound, partially because the band dabbles in various different styles. Yet, their sound is unique. One of my favorite characteristics about Snuff is that their songs are so recognizable. As with past albums, this record blends punk, hardcore, oi, ska/reggae (among others) into a distinctive sound. Songs like “A Smile Gets a Smile” and “Bob’s Song” utilize that high, scratchy guitar tone reminiscent of all Snuff albums. And on many songs, the organ, trombone, and subtle bass fills are used to fulfill the sound rather than lead the melody, though there are a few exceptions. Most notably, on “Dippy Eggs”, the horn takes the forefront on what is probably the catchiest tune on the record (I’ve been whistling this melody for a week now).

Another distinct characteristic that Snuff has solidified over the years is the vocal delivery. Vocalist/drummer Duncan Redmonds has the ability to shout over the noise while maintaining a semblance of melody. Opener “Kings of the Spanish Oi Scene” is a great example of this. And on “Patient Zero”, Redmonds begins shouting, but eventually decrescendos into a subtle style change. And all throughout, as on most previous albums, the lead vocals are matched by gang vocals and harmonies that round out that classic Snuff sound. My only gripe over the years, and on this album, is that the vocals are not particularly clear, but that more or less comes with the territory. And in the end, it may be a good thing because it forces the audience to listen more carefully.

The tempo on this record changes often throughout the entire album and within each song. “Summer’s Over” for example opens with a fast tempo, which causes some anticipation for the eventual break down at the end of the verse. “Love Hearts” utilizes a quick chord and vocal progression and “Kiss My Ring” has a hardcore speed feel to it. Other times, the band slows the rhythm down a bit and utilizes that Snuff chug-a-lug tempo on songs like “Big Shot”. And the record closes with an acoustic tune that broadens the band’s sound a bit.

Upon first listen, I wasn’t sure what to make of this record. It was hard to decide if this album would top their last efforts. I’m not sure if Snuff fans will view this as better or worse than the other albums. But one thing I do know is that the album gets better with each listen. Little nuances that aren’t clear on the first spin are eventually exposed. Ultimately it becomes clear that this an album full of good songs written and performed by seasoned punk veterans.