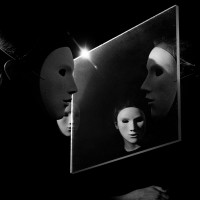 As you are likely aware, Hesitation Wounds is Jeremy Bolm (Touché Amoré) flexing his more traditional hardcore punk muscles alongside a roster of musicians with credits that include Madball, Slipknot, Trap Them and Against Me! So there’s no question about the calibre of musician here, that’s for sure.

As I say, this is pure hardcore punk territory. All of the band members exist in the heavy music world anyway, but most have day jobs that are maybe a little more time-consuming than their roles in Hesitation Wounds. Almost to prove this, the album (and they’ve been clear it is an album not an EP) is 7 tracks and 12 minutes 20 seconds long. Brevity is undeniably a core element of hardcore punk, but this is brief by anyone’s standards. Only 2 of the 7 tracks make it past the 2-minute mark, with the first track being a 43-second intro as well. Essentially, the band get in and out real quick.

But let’s talk about what we do have. The tracks are fast, furious and distinctive. Some hardcore punk can be accused of being meat-headed and built to a rigid formula. I don’t know that you could truly say that here. Bolm sounds like he really needs this outlet for cathartic purposes and you could hardly mistake his tone as he screams ‘and it makes me fucking sick / you charlatan fuck’ in the song of the same name. But there is a lot more sophistication here than that lyric alone might suggest. In single “We’re At Our Best When We’re Asleep” he sings ‘Another day in disarray / always set to fail / depression is so passé / when it’s not for sale’. That deviation from the standard hardcore punk template, both in terms of complexity and theme, at times extends to the musicianship as well. The guitar sound is heavy but distinctly wiry; precise and trebly as opposed to being thick and bass-heavy. Although seeming initially simplistic in its structure, the songs also feel less predictable than can often be the case with the genre.

Bolm’s work as a poet is well-documented and arguably at odds with what some people might imagine exists in the world of hardcore punk, but his artistry and subtle approach to an otherwise-brutal style of music makes for an engaging listen and one that brings something different to many of their peers. What is on display here is not simply unbridled aggression and frustration, but articulate and considered fury, often at quite specific injustices. The short run time arguably adds another dimension, but I won’t pretend I don’t wish it was a little longer. I don’t need to listen to all hardcore punk for 25-30 mins at a time, but I’d happily listen to more of this.