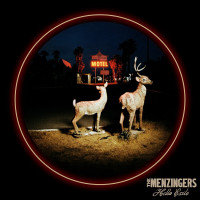 The Menzingers are back for their sixth LP and it's definitely another gem from a band that personally can do no wrong. I've thoroughly enjoyed all their material over the years, detailing broken hearts, lost loves and just about everything Philly and environs have to offer. But what really stands out here is that when I stopped listening to After The Party -- without a doubt my favourite record of theirs -- it felt, not just musically but thematically and lyrically -- like the penultimate episode of a TV show. Like the band was close to wrapping up and had one more hurrah left. Now, I don't want to get presumptuous, patronising or pretentious, but Hello Exile does feel like that series finale and actually, it's something that would fit naturally into what they've laid down in their catalog thus far.

Now, I doubt the title means they're off to exile or a self-imposed hiatus but I can see them taking time off after this album and some tours. It left me with that same feeling after the last Captain, We're Sinking record (aka their sibling band, literally) and when they called it a day, I wasn't surprised. What gives me this impression this band could follow suit now is how the Menzingers shape these tracks with a mid-tempo approach that doesn't pack in much aggression at all, relying on catchy melodies a la Rented World to kind of warm things down to a lull. It's anti-climactic, but not in a bad way, it's just about losing the restlessness of old and that fire of youth. "I Can't Stop Drinking" is a prime example of this, not to mention the closer in "Farewell Youth" -- which bookends their last few albums on drugs, drinking, smoking and what it finally means to be an adult. In short, it's all about older identities and this track in particular has that curtain-dropping effect to it.

Even early on, songs like "Anna" and "Strangers Forever" straddle that line where you think it'll be something a bit more punchier, but instead, we get chill hooks, bouncy baselines and honestly, some of the band's most radio-friendly/alt. content to date. I mean, I do love hearing about their personal defeats and triumphs but you can't help but think these sets of messages are done and dusted, and I honestly wouldn't want the band flogging them to death. "Last to Know" follows the same path, a slow-burner a la "Ava House" (without the drum beats) and while I do miss the more hard-edged, punk vibe of the band, it does feels like they're wearing their natural skin now and not forcing things for nostalgia's sake. In other words, yeah, it's approaching retirement the way they look back and more or less archive ghosts of past.

That said, the track I adore most is a quicker jam and one that sees them taking a political stance on "America (You're Freaking Me Out)" as it boasts a heck of a chorus and is a banger I can see killing it live. It perfectly encapsulates what Tom May and Greg Barnett have always been about as vocalists: dynamism, imaginative interplay and masterclass storytelling. And this is a much more open documentary that we can all relate to as they worry about the state of their nation. I wish there were more songs like this and that bits were drawn from all the other eras, as if the Menzingers were making a compilation, a "Best of..." album with new tracks. But hey, that's me being picky and selfish -- let's just bask in the glory of the new album and enjoy it for what it is. Not their best, not their worst... but something that'll move you as usual and help you appreciate life for the gift it is.