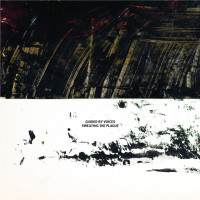 Guided By Voices has been kicking around for somewhere around thirty-five years, and the ever-prolific Robert Pollard-led outfit is still bursting with ideas. After already releasing two records in 2019 (the carefully crafted Zeppelin Over China and the spontaneously fantastic Warp and Woof), GBV is closing out 2019 with more nods to The Who and King Crimson. Though the brevity of their earlier work may be missing here, the intriguing nuggets and elegant melodies that pop up throughout Sweating the Plague are captivating.

Sweating the Plague goes off into interesting and peculiar directions. Strange highlights include songs like the closing couplet of “My Wrestling Days Are Over” and “Sons of the Beard”, with each using treated vocals that leave Pollard sounding a bit underwater as beating rhythm guitars stomp overtop cinematic strings that slightly hang in the background. And where “Wrestling” ends with the chaos of voices nonsensically conversing, “Beard” closes with guitars that sound fit for the Court of the Crimson King. On another of the stranger songs, “Downer”, a tense opening gets shattered by what sounds to be a reverse cymbal every so often before breaking into a driving rock song. Pollard’s lead vocals are spot on and get accented by weird jittering backing vocals that sputter underneath. What’s so good about this stuff is that, amidst the chaos and mutations, fantastic nuggets and earworms abound.

While Sweating the Plague wallows in big strange rock, it also brings some pop, both saccharine and dour. “Street Party” and “Unfun Glitz” change up time and again, with herky jerky flashes, blasts of uplifting near-punk rock, and deep dives into heaviness and guitar effects. Hooks are all over these two songs, with Pollard’s vocals sounding fantastic on both. Same goes for the gorgeous “Heavy Like The World”, a chiming and rolling guitar anthem that drives forward behind some of the most sublime vocal melodies on the record. But I think my favorite moments come on two other songs, “Mother’s Milk Elementary” and “Your Cricket Is Rather Unique”. “Mother’s Milk” has an acapella opening that leaves Pollard sounding as vulnerable as he ever has. As it develops, an unadorned and melancholy ballad takes shape, with a melody that reminds me a bit of “King and Caroline” from Alien Lanes. Meanwhile, “Cricket” is maybe the purest pop song on Plague. The chorus has a wonderful melody, and the vocals (sung by drummer Kevin March) sound pretty perfect set against the guitars and tumbling rhythms. These are the types of songs that just won’t leave your brain.

By the time all is said and done, Guided By Voices have put together a record that is, at times, strange and heavy, and at others, pretty and catchy. Sweating the Plague is a terrific record, one that offers up a little bit of something for everyone. Fans will be happy.