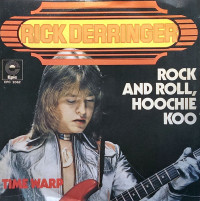 Perfection comes in many forms. Some might say “The Decline” by NOFX is perfect. Others would define Green Day’s “Dookie” as a perfect pop-punk album, and still others would define Beethoven’s Fifth as true perfection. Are any of these statements false? No, not when dealing with art, because perfection, like beauty, in art, is in the eye of the beholder.

Rick Derringer created something perfect, in some eyes, back in 1973 when he released the single “Rock and Roll Hoochie Koo”. WIth lyrics that scream “Lawdy Mama Fight my Blues” and “I’m getting high all the time, and I hope y'all are too”, it becomes difficult to say that Derringer has created anything but a pure masterpiece. He takes his guitar riffs and shoves them up the music industry’s “Hoochie Koo”, if you will.

He was tired of paying his dues, so he dropped on out to spread the news of Rock N Roll to whomever was ready to listen, and did so in a way that can only be described as perfect rock music. The guitar solo at about one minute forty five seconds melts the faces of anyone who happens to be in an eight foot radius of any speaker playing such beautiful sounds, if you know what I’m talking about.

I challenge any reader of Punknews to find a better single that was released in 1973! This song has been on repeat for me for at least the past 2 hours, and somehow it gets better everytime I hear it. Lawdy Mama, light my fuse!

Dark Thoughts: Do You Dream [7-inch]