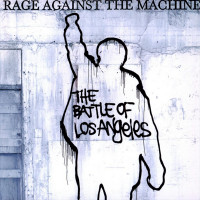 Rage Against the Machine

(note- this retro review was submitted the day before Rage announced their 2020 reunion shows. PN is presenting the review as written at the time. -ed.)

The Battle of Los Angeles was Rage Against the Machine’s third album and their final album of original material as their fourth and final album, Renegades was a covers album. Rage never truly put out a bad album, but The Battle of Los Angeles stands as my favorite simply because of the creative and mesmerizing guitar tricks pulled off by guitarist Tom Morello. But while Morello and frontman Zack de la Rocha often get the bulk of the credit for Rage’s success, it’s a little bit unfair as a big part of why the band succeeded was that all four members were absolutely excellent at what they did. While Rage were often referred to as rap-metal, predating the popularity of that ill-fated genre by nearly a decade, I’ve never really thought it was accurate to call Rage Against the Machine heavy metal since there’s really not a lot of blues elements in their music, which to me is the basis for heavy metal. The 90’s would come to redefine what metal really is, particularly with the advent of nu metal at the end of the decade, but I tend to disagree with that redefinition as well. When I hear Rage what I really hear is hip-hop, funk, some punk, and a touch of thrash. That combination definitely requires a band that’s firing on all four cylinders, with not just an excellent vocalist and guitarist, but also a great bassist and drummer to really pull off the funk elements.

One thing I love about Rage is their ability to come up with really political lyrics that get their revolutionary ideals across while also being deeply poetic. Zack de la Rocha’s lyrics were sometimes a little cryptic, but there was never any question of what exactly they were raging against. In addition to the band’s lyrics, they were always explicit in expressing their political beliefs and, in a more primitive era for the internet, they utilized their online platform to outline their political views to anyone that was interested. Growing up I would occasionally meet conservatives who inexplicably listened to Rage and ignored the revolutionary politics, but for many I feel like Rage’s politics planted a germ of an idea in many people’s heads that ultimately blossomed into a more leftist worldview.

From the opening track, “Testify,” Morello manages to make his guitar sound like a tornado in its swirling fury as de la Rocha’s lyrics draw comparisons to Orwell’s 1984 with “Who controls the past now controls the future/Who controls the present now controls the past.” One of the ongoing themes on the album is the trial and imprisonment of activist and journalist Mumia Abu-Jamal for allegedly murdering a police officer. Many left-wing activists insist that Abu-Jamal is innocent, including the members of Rage Against the Machine and, while “Voice of the Voiceless” is the song on this album most directly about Abu-Jamal and his trial, the fact that the first song was called “Testify” was probably not a coincidence, nor were the lyrics from lead single, “Guerilla Radio”: “Sound off, Mumia go on be free!/Who got 'em? Yo, check the federal file/All you pendejos know the trial was vile.” The album’s second single, “Sleep Now in a Fire,” tackles genocide and slavery from Christopher Columbus to the American slave trade. Side note: if anyone more musically inclined than me could record that killer guitar riff from “Sleep Now in a Fire” on a banjo I would really love to hear it.

After Zack de la Rocha left the band, the remaining members have stayed together and formed two other bands with different frontmen: Audioslave with Chris Cornell, and Prophets of Rage with Chuck D. and B-Real. Neither band has even come close to the brilliance of Rage, despite having frontmen who have been excellent in other projects, proving that Rage was always more than the sum of its parts. But even 20 years after their last album of original material the band’s music remains extremely relevant and will remain the soundtrack to revolutions yet to come.