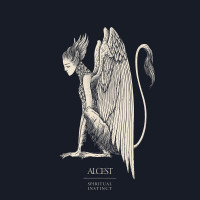 The deconstruction of Alcest’s pioneering sound began to materialize with 2014’s Shelter. It was as if Neige was starting over, pulling apart the two genres that shaped the blackgaze movement that he ultimately defined. Shelter was weightless and airy, like a mental journey with the haze and dreaminess of shoegaze as a backdrop. Years later, it was followed up by Kodama, a concept album exploring both the separation and intertwining of spirituality and the material world. It reintroduced the heaviness and black metal elements back into the songwriting, but still lacked that balance of density and ethereal escapism that originally created their trademark style. That said, the reimagining of blackgaze was slowly starting to take form, and with Spiritual Instinct, Alcest doesn’t just return to form, they reinvent it.

The fixation with alternate realities and a self-described “otherworld” in Neige’s creative approach leaves much up for interpretation for the listener. Despite the album title, Spiritual Instinct represents the physicality in his storytelling. The mental strife and spiritual quests in the previous records seem to be the preparation leading up to the actual act of battle in this imaginary realm. This process, in turn, follows tangentially with the gradual progression of their recent records, injecting a more melodic and modern accession into their atmospheric tones and metal extremity.

Spiritual Instinct was something that Neige is quoted in saying that “...needed to get out of me. It’s darker than usual, and heavier.” Within the first minute of opener, “Les Jardins De Minuit,” it’s clear that whatever thoughts and emotions had been manifesting within Neige could no longer be internalized. The dark ambiance of eerie chanting bleeds its way into pure brutality anchored by the drumming of his long-time visionary partner, Winterhalter. It’s their heaviest song in some time, keeping the chaotic nature steady throughout as the chants quickly evolve into shrieking screams. While not as violent, “Protection,” continues on with power with more prog-metal inspired riffs. The track bears enormous melodies, delving into the physical effects of our surroundings and how we may be at their mercy, (merci, Google Translate.)

The arc of Neige’s story comes in “Sapphire.” With lyrics written in his own invented language, it seems to be where the true confrontation takes shape - the summation of all the inner turmoil that slowly developed starting with Shelter. It makes you want to run, to charge, to accelerate. “Sapphire” is the perfect fight song, where the bass lines shine and deliver a coating of “grooviness” atop angst and adrenaline.

Spiritual Instinct winds down as it remains wound up. It closes with the title track that feeds from the various aspects of metal in the preceding songs without losing any buoyancy. It epitomizes the direction Alcest is moving towards, or maybe it’s just the conclusion to this chapter.

The Reaganomics: The Aging Punk