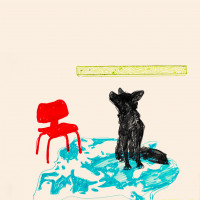 The 10 song LP fires open with "Kawasaki Backflip," rocking textured guitars over angular, rough vocals from singer/guitarist Alex Stoitsiadis. "Beuno" ups the tempo, paying alt-rock expertise with varying drum pockets, and wrenched, bending leads from Stoitsiadis and Parker Grissom, the second verse combs dissonance into a slow-build à la Weezer that is a highlight of the release. "Prom Hell" is a spiked bummer track that beautifully increases in intensity throughout it's reel.

"Fox" is an spectacular song, from it's methodical dual guitar/bass structures to some charming vocals from both Stoitsiadis and bassist Chase Macinski. The 6/8 groove to "Headfirst" startles unexpectedly before commanding the unique tempo and droning lyrics, and buttons right up with the straight forward indie rock "Hotlines." There is a general grit to Melee that would parallel very early Nada Surf and Thursday at the top of their game, with crunchy guitars and loud vocals constantly driven next level by methodical drummer Jacob Hanlon.

"Wrist" carries on with more of the same raw energy and honest lyrics, while "Cannonball" cranks the doom and gloom to slow, hard tempos, and resolves in a fantastic choral outro. The album suds shut with more slow riffs and unique drumming from Hanlon on "Ender." The epic 6:21 closer builds on angst, loss, and acceptance with a variety of tempos and two incredibly poignant dropouts before heavily resolving into a beautiful string section.

Dogleg prove with the duration of Melee that their unique and powerful sound, depends on every inch of their four piece line-up, and perfectly draws intersecting lines in the sand between the many definitions of indie rock. Fucking excellent work.