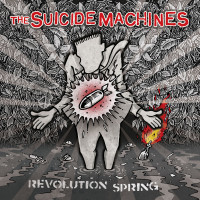 The Suicide Machines haven't released an album since 2005's War Profiteering is Killing Us All, which, albeit continuing to notion the band's charming ska flavors, hoisted heavy, pitted bangers themed to a failed Bush America and a never ending conflict in Iraq. It is comebacks from legends like the Detroit four piece that entice the listener simply on the announcement of an upcoming full length: What is their take going to be on whatever the fuck is going on in our world today?

The result is 16 killer songs stuffed inside 34 minutes of reel, riddled with classic standards from the group, and grown to new perspectives and musical experiments in a melting planet. Revolution Spring is tremendous. The album fires on with nods to the now 24 year old Destruction by Definition with "Bully in Blue," and while the 2015 full album tour of the debut release may have not shaken something loose in the band, the nuances speak volumes. Single "Awkward Always" immediately shifts to the ska/punk side of the band, and while the outfit has continued on without longtime guitarist/co-vocalist Dan Lakacinsky, the Suicide Machines sound rings pristine and concurrent with the addition, (and SM clean ska tone) of guitarist Justin Malek.

"Babylon of Ours" is draped on some of the most experimental content in the band's discography, and the hopeless two-tone ska, complete with organ, leans against "Flint Hostage Crisis," perhaps one of the best songs they have ever written. Vocalist Jay Navarro has sewn his politics to his vocal cords, but this song, and the band's history in the Detroit area, pop out particularly.

"To Play Caesar (Is to Be Stabbed to Death) verses the double standard of trigger-happy social justice warriors and their dark, bullying, cloud on progressive victory, and is buttoned to another Destruction era'd "Trapped in a Bomb." "Detroit is the New Miami" took the aggression even further, heaving the speed onto the back of the laser focus of drummer Ryan Vandeberge.

Revolution Spring holds a significant "home-run walk" of optimism in it's second half, as it almost rushes to completion with classic 2 minute Suicide Machines songs, and a lot less aggro-moods. Notable (four-way) winner of the record comes to Rich Tschirhart, who is easily somewhere in the top 4 spot for bass players in the genre. His pocket choices have always been spectacular since his joining the band in 2002, and his walks, class, and gained bass tone carry the entire album.

"Cheers to Ya" completes the thought, tying the album together with familiar tempos, a welcoming horn section, and a message of uncertainty. It seems the state of affairs certainly has gotten worse in the United States, and there is no better time to admit it than right now. Revolution Spring is a gift, from a very special band, to remind us that things are still fucked, and probably getting worse, but layered with A music to walk us off of the ledge, for the time being. Shit shreds, thank you, Suicide Machines.