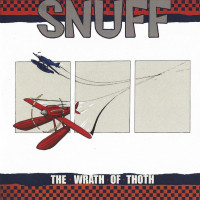 Last year, Snuff released a new full length on Fat Wreck Chords seemingly out of nowhere, at least from my perspective. A few months later, the band recorded and released 6 more songs to be sold on tour in the UK in May. But that didn’t happen for obvious reasons, so the band has decided to sell the limited colored vinyl online.

One of my favorite characteristics about the band is that anytime you hear a new song, it is instantly recognizable. It could be argued that there aren’t any other bands that sound like Snuff (with the possible exclusion of their side projects) and The Wrath of Thoth is no exception.

The opener, “Drink from the Chalice of Lunacy” maintains that classic Snuff sound, as do the rest of the tracks, with a repeating rhythm and Duncan’s distinct, lovely mumble. It’s definitely beneficial to have the actual lyrics when listening. Even then, I barely know what the hell they’re singing about, but that’s part of the fun. On “Nothing to See Here”, the horns are prominent, yet still just part of the commotion, contributing to the blend of noise and melody, a somewhat typical Snuff move. And on “Conductor 71”, the band picks up the rhythm a bit, though it changes often throughout the song, portraying a sense of urgency that matches lyrics like “time ain’t been good to you, you ain’t been good to you.”

The second side continues to prove that the band hasn’t lost their sound, though it is more reminiscent of some of their catchier tunes. “Poetic Nonsense” utilizes an organ and the song reminds me a bit of tracks like “Nick Northern”. And “The Bells of Hell Go Ting-A-Ling-A-Ling” has that classic feel-good, goofball, yet kinda serious sound. It’s repetitive, catchy, and sort of like a nursery rhyme that reminds me of “Areshole”. And the closer “King of the Wild Frontier” is a song that defines Snuff as a band. It’s super catchy and is probably my favorite track on the album, once again solidifying them as a fun, yet serious, band.

This EP is a great follow up to There’s A Lot Of It About. It could even be argued, despite containing less songs, that it  tops their latest full length. Either way, this will be a great addition to the record collection of any Snuff fan.

The Putz: Rise and Shine