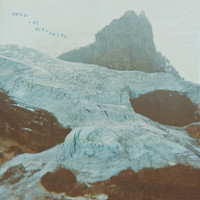 At this point, most of what Mike Kinsella does as Owen no longer feels like a solo act, but instead doubles as American Football sequels. No, not even spinoffs, but extensions of each other. Sure, the last couple AF albums were denser instrumental-wise and I guess more pop-rockish, but my big gripe was that they sounded too much like Owen. However, while it's tough to disassociate the two, it's way easier to speak about Owen as that stood on its own with this particular style before, and has influenced Kinsella's direction with AF, rather than vice versa. With that in mind, The Avalanche, as deep and existential as it is, could have been refined a bit to produce something a bit more exhilarating and exciting, which I think Kinsella is capable of as he ages like wine.

Most of the record consists of, as expected, shimmery acoustics and picky, catchy melodies. They're a ton of slow-burners you'd find on Netflix romantic dramas and coming of age stories, as per songs like "A New Muse" and "Dead For Days". What makes them sting a bit more is that in my mid-'30s, a lot of Kinsella's rhetoric on love, loss, sobriety and such leave you reconciling a lot of your past regrets and successes. In that sense, it's relatable poetry and establishes a personal connection early on, which we know Kinsella can do with words that sink fangs into you at every syllable. I love the spacey, moody atmosphere of most tracks, and also how there's a symphonic air, which again AF has copied.

But I'd love this record more if it came a while after after the last AF LP. Still, let me not nitpick. After all, the orchestral vibe here in a year where we got another gem from Brian Fallon isn't anything to argue about. Plus, a lot of these tracks like "The Contours" and "I Should've Known" continue to finesse Kinsella's body of work and put him right alongside the likes of Sufjan Stevens and Elliott Smith in my humble opinion. I'd love for Kinsella to get a bit more folky at some point, though, rather than just using the ethereal hum of organs (as per the closer "I Go, Ego") or swoony violins because they can get monotonous and also, a tad one-dimensional. And make no mistake, there's immense potential here for walls of heartbreaking sound that don't feel like they'd take long to crawl up your back.

You can tell when Owen goes darker and edgier, that kind of haunting vibe creates a fluidity and dynamic you want to hear more of. "Mom and Dead" is a prime example of this and adds a more rounded layer to Owen, who right now has a lot of tracks that run way too long and feel a tad repetitive on this effort. This song in particular has a dire sense of urgency and this kind of impetus has an injection of energy I think Owen is meant to excel at. But again, Kinsella is poetry in motion as usual, and waxes profoundly on everything you need to light fires down memory lane.

Hopefully, it doesn't feel as drawn out when we get more music in the future because I think dirty and rugged, and maybe even faster, aggressive and louder, could work wonders while still shaping a contemplative ghost to act as our companion into the future. At this point, it's clear that as good as Owen is, the act has to evolve especially with AF fluttering above its head and copying so much of its magic. And trust me, it'll be a decision that works out best for the standalone project as it'll feel like it has much more of a creative identity.