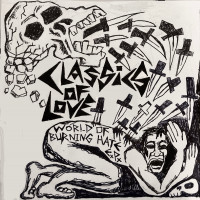 In a few interviews, Jesse Michaels has alluded to the fact that he doesn’t like to claim total credit for writing his music due to the fact that it just comes to him from the ether and he often feels he doesn’t have too much to do with the actual song creation. Well then, perhaps its due to the chaos that is storming around the world, but Calliope and Euterpe have once again chosen to whisper in Michaels’ ear after eight years of keeping mum.

Classics of Love now consists of Michaels, Sharif Dumani on guitar and bass, and Peter John Fontes. The earlier iteration of the band consisted of Michaels backed by Hard Girls, who since have parted amicably. Whereas the lone Classics of Love LP was shocking in that it was pretty much a straight up hardcore blaster, the new World of Burning hate EP is shocking in that the band is still hardcore, but now they are frantic, furious, and ragged. One of the smart tricks of Classics of Love mark 1 was that, despite the fact that they played hardcore more less, everything was angular and clean- almost as if Gang of Four or Magazine decided to cut a hardcore record.

But that’s not the case here. World of Burning Hate is a fitting title for the release because this release is burning and it’s in a constant state of self-destruction. Michaels himself howls and shouts more than he ever has before, sonically splitting between Bruce Loose and Cal Morris. He sounds like he’s at the end of his rope as he screams “how can I get through to you?!!!!” on “Dawn of Universal Law.” The way Michaels bends contemporary human issues into a sort of cosmic contemplation somewhat echoes Cro-Mags cosmology- that is, Michaels’ lyrics might be coming from the man, but it sounds like a galactic truth being uttered. The guy knows how to cut to the core of human feeling. And thankfully for us, instead of using a calm zen-like delivery, the dude is just completely raging. This isn’t coming from his mind or a textbook or a self-help lecture, this is coming from his heart.

Part of this successful strike is definitely owed to Dumani and Fontes. They’re not scared to get wild and they’re not scared to play a wrong note or be slightly off here or there- and that’s greatly to their credit. The point is that the world is out of control and the band is too, lashing back against, well, pretty much everything 2020. This is not a perfect, sanitized recording- it’s an honest, reactive kick that not only isn’t scared to be human, but prides itself in being human amongst a word becoming increasingly inhumane.

And listen, you don’t want to put Michaels on a pedestal too much. Surely, he has flaws and is the same kind of human that you and I are- a cornerstone of this EP is that humans are humans are entitled to that level of respect- no more or no less. Yet then again, every decade or so, Michaels seems to appear like an angel or a cicada or a cosmic signal, and astoundingly, he always seems to deliver music that is timely, moving, and frankly just startlingly kick ass. So, maybe Michaels is human, but whatever muse or creature or entity that flips the switch in his brain certainly isn’t.

The Slackers: Nobody's Listening/Sleep Outside [single]

All Time Low: Wake Up Sunshine