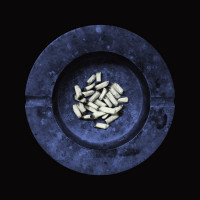 If you’ve been following Laura Jane Grace on Twitter since her entire spring and summer touring schedule were canceled back in March, this surprise album shouldn’t have been that much of a surprise. Besides all the wistful pictures of a nearly empty recording studio, and the record-from-home contraption that she shared with us on Twitter that looked like her head was encased inside one of the robots from MST3K, it was also clear that being home made her restless and she needed to work on something. It was obviously not Against Me! since she seemed to be working with few to no people, but it was obvious she was working on something. About the only thing that’s at all surprising about this album is that Grace would choose to make two solo/side project albums before finally releasing the long-awaited new Against Me! album, but perhaps “choose” is the wrong choice of words in the circumstances. Stay Alive is basically the album Laura Jane Grace made to stay sane.

“Delicate, Petite, and Other Things I’ll Never Be” was one of the song titles from the most recent Against Me! album, and while it may be true on a physical level, Grace proves it wrong on a musical level, as she shows a great deal of delicacy playing with just a guitar. Occasionally some electronic beats are added in, always something simple that she could still reproduce as a one woman show. It calls to mind the early years of the Mountain Goats, of whom Grace has covered a number of times both live and in studio. It also calls to mind for me the 2016 Conor Oberst solo album, Ruminations which Oberst recorded while recovering from exhaustion using only a guitar, a piano, and a harmonica. Stay Alive’s musical simplicity highlights the lyrics which showcase a theme of loneliness and crumbling edifices in a collection of songs that were, surprisingly, written pre-COVID.

Grace said that the songs were written before lockdown started, but out of all the songs she wrote she kept only the ones that seemed eerily appropriate given recent events. Obviously there are some that were tweaked in hindsight, most notably “Shelter in Place,” but it’s almost spooky how well these particular songs fit the mood of quarantine. Grace finds some beautiful yet simple melodies, such as on “Why Kant I Be You?” with its clever title combining the name of an 18th century German philosopher with the title of a Cure song, making a possible passing nod to queer, punk musical Hedwig and the Angry Inch. She creates some deceptively simple ear worms like the hook of “Hanging Tree” where the ironically misplaced sing-songy tune undercuts ithe song’s ruthless take down of white supremacy. In this album of 14 fairly short songs, there are a lot more nooks and crannies to explore than you’d expect . It can be a slow burn, but if you give it time to grow on you, I guarantee it will.